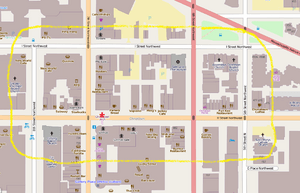 Map of Washington, D.C., with Chinatown highlighted in yellow

Chinatown in Washington, D.C.(Chinese: 華府華埠; pinyin: huá fǔ huà bù), is a small, historic borough east of downtown consisting of about 20 ethnic Chinese and other Asian restaurants and small businesses along H and I Streets between 5th and 8th Streets, Northwest. It is known for its annual Chinese New Year festival and parade and the Friendship Arch, a Chinese gate built over H Street at 7th Street. Other nearby prominent landmarks include the Verizon Center, a sports and entertainment arena, and the Old Patent Office Building, which houses two of the Smithsonian Museums. The neighborhood is served by the Gallery Place-Chinatown station of the Washington Metro.

Map of Washington, D.C., with old Chinatown highlighted in red and the current Chinatown in yellow

The Chinatown area was once home to many Chinese immigrants. Chinese immigrants began to move into the area in the 1930s, having been displaced from Washington's original Chinatown along Pennsylvania Avenue by the development of the Federal Triangle government office complex. The newcomers marked it with decorative metal latticework and railings as well as Chinese signage. At its peak, Chinatown extended from G Street north to Massachusetts Avenue, and from 9th Street east to 5th Street.

In 1986, the city dedicated the Friendship Archway, a traditional Chinese gate designed by Alfred H. Liu, a local architect and chairman of the Chinatown Development Corporation, who emigrated from Taiwan to the United States as a teenager. The colorful, US$1 million work of public art includes seven roofs up to 60 feet high, 7000 tiles, and 272 painted dragons in the style of the Ming and Qing dynasties. Erected to celebrate friendship with Washington's sister city of Beijing, it was hoped the arch would reinforce the neighborhood's Chinese character. According to the plaque next to the arch, it is the largest such single-span archway in the world. In 1993, the Friendship Archway underwent a major renovation funded by D.C. and Chinese governments. Artisans from China performed extensive repairs on the archway and repainted its decorations.

In 1986, the Metro station was given its present name: Gallery Place-Chinatown. The city constructed the Wah Luck House apartments at 6th and H Streets, NW, to accommodate the displaced residents in 1982. Designed by architect Alfred Liu, the apartment building introduced modern Chinese design motifs due to the red-paneled balconies. The MCI Center was completed in 1997 (renamed Verizon Center in 2006). After the construction of the Verizon Center, AsianWeek said in 2000 that the neighborhood "barely" remains.

Chinatown had fallen into disrepair after the 1968 riots. Ethnic Chinese residents, as well as many others, left for suburban areas in Maryland and Virginia.

In 2010, the census tract that contains Chinatown has around 3,000 residents. Chinatown is only 21% Asian, compared to 1990, when it had a majority Chinese American population. In 1990, its population was 66% Asian and 20% African American. Washington, D.C.'s Chinatown is relatively small in terms of size and number of Chinese residents in comparison to other major Chinatown neighborhoods in the U.S., such as those in San Francisco and in Manhattan. Approximately half of Chinatown's residents live in the Wah Luck House, which has 153 units of apartment complexes. The closest Chinese supermarket, the Great Wall Supermarket, is fourteen miles west in Falls Church, Virginia.

After the 1968 riots due to Martin Luther King, Jr.'s assassination, many Chinese people sought a more economically stable and safe environment and moved out of Washington, D.C.'s Chinatown, relocating to suburban neighborhoods in Fairfax County, Virginia, and Montgomery County, Maryland. North Potomac, Maryland is 18.4% Chinese American, the highest of any community within the Washington metropolitan area. The Maryland city of Rockville also has a significant population of residents of Chinese descent, at eight percent. In Virginia, sizable Chinese American communities are located in Centreville, Chantilly, and Floris, south of Washington Dulles International Airport. 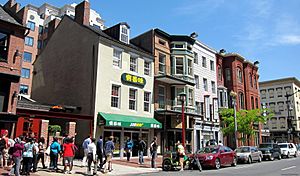 The 700 block of H Street, N.W., in Chinatown. Built in the late 19th century, the buildings are designated as contributing properties to the Downtown Historic District, listed on the National Register of Historic Places.

Along with the development of the Verizon Center, historic buildings, mainly along the west side of 7th Street, were renovated and tenanted, primarily with nationally-known brand shops and dining establishments. Within a short time, a significant mixed-use office-residential-retail development on the southeast corner of 7th and H streets commenced construction. These developments, which included restaurants, shops, a cinema complex, and a bowling alley, together with the Verizon Center, transformed the area into a bustling scene for nightlife, shopping, and entertainment. An anomaly is that most of the businesses are no longer representative of Chinatown, yet due to a city requirement to post all identifying signage in Chinese characters even national chains -- Starbucks, Ruby Tuesday, Ann Taylor, Urban Outfitters, Bed Bath and Beyond, and Legal Sea Foods—hang their names in Chinese outside their stores. Chinatown has become home to many high-growth technology companies, such as Blackboard, Blue State Digital, LivingSocial, and The Knowland Group. It is also the location of the Washington branch of the Goethe-Institut. 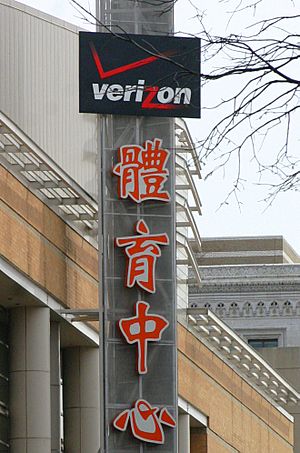 Chinatown's most prominent businesses are the approximately 20 Chinese and Asian restaurants, almost all of which are owned by Asian American families. Among the most well-known are Chinatown Express, Eat First, Full Kee, and Tony Cheng's. One of the restaurants, Wok & Roll, occupies what was once Mary Surratt's boarding house — the meeting place for John Wilkes Booth and his conspirators in Abraham Lincoln's assassination. Another is located in a house once owned by the On Leong Chinese Merchants Association, which was among the first Chinese organizations to move into the neighborhood; today the structure is on the National Register of Historic Places.

The neighborhood is home to a Chinese video store, several general stores, and numerous Chinese American cultural and religious charities. Chinatown has one Chinese church, Chinese Community Church, located at 500 I Street. Chinese Community Church was founded in 1935, initially at L Street, but relocated in 2006 to its current I Street location. The 6th and I streets historic synagogue has been restored and is the scene of cultural events.

All content from Kiddle encyclopedia articles (including the article images and facts) can be freely used under Attribution-ShareAlike license, unless stated otherwise. Cite this article:
Chinatown (Washington, D.C Facts for Kids. Kiddle Encyclopedia.