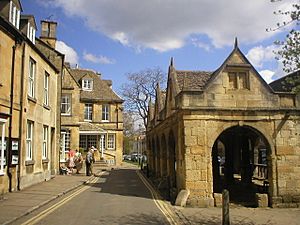 Chipping Campden is a small market town in the Cotswold district of Gloucestershire, England. It is notable for its elegant terraced High Street, dating from the 14th century to the 17th century. ("Chipping" is from Old English cēping, "a market, a market-place"; the same element is found in other towns such as Chipping Norton, Chipping Sodbury and Chipping (now High) Wycombe.)

A rich wool trading centre in the Middle Ages, Chipping Campden enjoyed the patronage of wealthy wool merchants (see also wool church). Today it is a popular Cotswold tourist destination with old inns, hotels, specialist shops and restaurants. The High Street is lined with honey-coloured limestone buildings, built from the mellow locally quarried oolitic limestone known as Cotswold stone, and boasts a wealth of fine vernacular architecture. At its centre stands the Market Hall with its splendid arches, built in 1627.

Other attractions include the grand early perpendicular wool church of St James – with its medieval altar frontals (c.1500), cope (c.1400) and vast and extravagant 17th-century monuments to local wealthy silk merchant Sir Baptist Hicks and his family – the Almshouses and Woolstaplers Hall. The Court Barn near the church is now a museum celebrating the rich Arts and Crafts tradition of the area (see below). Hicks was also responsible for Campden House, which was destroyed by fire during the English Civil War possibly to prevent it falling into the hands of the Parliamentarians. All that now remains of Hicks' once imposing estate are two gatehouses, two Jacobean banqueting houses, restored by the Landmark Trust and Lady Juliana's gateway. Hicks' descendants still live at the Court House attached to the site.

There are two famous and historic gardens nearby: at Hidcote Manor Garden, owned and managed by the National Trust, and at Kiftsgate, in private ownership but open to the public. Two miles to the west, in the grounds of Weston Park near Saintbury, are the earthwork remains of a motte-and-bailey castle.

The town has hosted its own Olimpick Games since 1612. The Olympic torch passed through Chipping Campden on 1 July 2012. 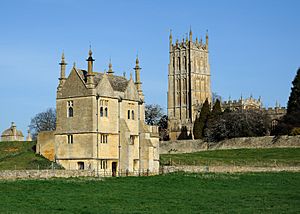 Since the early seventeenth century the town has been home to a championship of rural games, which later turned into Robert Dover's Cotswold Olimpick Games. The Olimpicks are held every summer on the Friday evening following the late Spring Bank-holiday (usually late May or early June), on Dover's Hill, near Chipping Campden. Peculiar to the games is the sport of shin-kicking (hay stuffed down the trousers can ease one's brave passage to later rounds). To mark the end of the games, there is a huge bonfire and firework display. This is followed by a torch-lit procession back into the town and dancing to a local band in the square. The Scuttlebrook Wake takes place the following day. The locals don fancy dress costumes and follow the Scuttlebrook Queen, with her four attendants and Page Boy, in a procession to the centre of town pulled on a decorated dray by the town's own Morris Men. This is then followed by the presentation of prizes and displays of Maypole and Country dancing by the two primary schools and Morris dancing. Another procession from there past the fairground in Leysbourne and the Alms Houses brings that stage of the celebration to a close whilst the fair continues until mid-night and, like a ghost, is gone by the morning.

Since 2002 Chipping Campden has hosted what is now widely recognised as one of the UK's leading music festivals.

In the early 20th century, the town became known as a centre for the Cotswold Arts and Crafts Movement, following the move of Charles Robert Ashbee with the members of his Guild and School of Handicraft from the East End of London in 1902. The Guild of Handicraft specialised in metalworking, producing jewellery and enamels, as well as hand-wrought copper and wrought ironwork, and furniture-making. A number of artists and writers settled in the area, including F. L. Griggs, the etcher, who built Dover's Court, (Now known as New Dover's House) one of the last significant Arts and Crafts houses, and set up the Campden Trust with Norman Jewson and others, initially to protect Dover's Hill from development. H. J. Massingham, the rural writer who celebrated the traditions of the English countryside, also settled near the town. Ananda Coomaraswamy, the Sri Lankan philosopher and art critic and the hand loom weaver Ethel Coomaraswamy, settled at Broad Campden where Ashbee adapted the Norman chapel for him.

All content from Kiddle encyclopedia articles (including the article images and facts) can be freely used under Attribution-ShareAlike license, unless stated otherwise. Cite this article:
Chipping Campden Facts for Kids. Kiddle Encyclopedia.