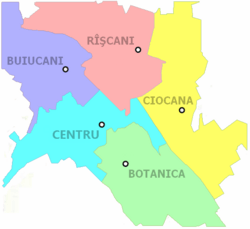 The city is in the middle of the central area of Moldova. It is divided into five administrative districts. These are:

Chișinău was founded in 1436 as a monastery town. The city was part of the Moldavian Principality, which, starting with the 16th century fell under the suzerainty of the Ottoman Empire. At the beginning of the 19th century it was a small village of 7,000 people. In 1812 it was occupied by Russia, who made it the centre of Bessarabia. By 1862, there were 92,000 people. By 1900, there were 125,787.

Following the Russian October Revolution the country declared independence from the fallen empire, before joining the Kingdom of Romania. With Moldova only autonomous in the new state, Chișinău lost its title as Capital and moved into the background.

Between 1918 and 1940 the center of the city undertook large renovation work. In 1927 a monument to the famous prince Stephen III of Moldavia, by the artist Alexandru Plămădeală was erected.

In the chaos of the Second World War Chișinău was nearly completely destroyed. This began with the Soviet occupation led by the Red Army from 28 June 1940. As the city began to recover from the takeover, a devastating earthquake occurred on 10 November 1940. The epicenter of the quake, which measured 7.3 on the Richter scale, was in eastern Romania and subsequently led to substantial destruction in the city.

After scarcely one year the assault of modern-day Moldova by the German army began. From July 1941 the city suffered from large-scale shooting and heavy bombardments by Nazi air raids. The Red Army resistance held until Chișinău finally fell on 17 July 1941.

Following the occupation the city suffered from the characteristic mass murder of predominantly Jewish inhabitants. As had been seen elsewhere in Europe, the dwindling followers of Judaism were transported on trucks to the outskirts of the city. There they were then shot in partially dug pits. The number of Jews murdered during the occupation of the city is estimated at about 10,000 people.

As the War drew to a conclusion the former capital was pulled once more into heavy fighting as German troops retreated. After nearly six months of fighting Chișinău finally fell on 24 August 1944 to the Red Army. By this point the city had lost 70% of its buildings and constructions - the earthquake of 1940 and the air raids contributing to the largest part of this.

After the war the head of the Soviet Union, Joseph Stalin, claimed the area around Bessarabien, to be in his own nation's sphere of influence. With the war completed, Stalin reorangised the political landscape of Eastern Europe, giving nominal independence to Romania and incorporating Moldova into the USSR. Thus Chișinău was once more made capital of the now 'autonomous' republic.

In the years 1947 to 1949 the architect Alexey Shchusev developed a plan with the aid of a team of architects for the gradual reconstruction of the city.

The beginning of the 1950s saw a rapid increase in the number of people, with which the Soviets responded by constructing large-scale housing and palaces in the style of Stalinist architecture. This process continued under Nikita Khrushchev, who called for construction under the slogan "good, cheaper and built faster". The new architectural style brought about dramatic change and generated the style that dominates today, with large blocks of flats arranged in considerable settlements.

The period of the most significant development of the city was from 1971, when the Council of Ministers of the USSR has adopted a decision "About the measures for further development of Kishinev city", that secured more than one billon rubles of investments from the state budget, until 1991, when Moldova gained independence.

Chișinău is governed by the City Council and the City Mayor, both elected once every four years. The current mayor is Dorin Chirtoacă. Ursu is the former vice-mayor, between August 1994 and April 2005 was Serafim Urechean. Under the Moldovan constitution, Urechean - elected to parliament in 2005 - was prevented from holding an additional post to that of an MP. The Democratic Moldova Bloc leader accepted his mandate and in April resigned from his former position. During his 11 year term, Urechean committed himself to the restoration of the church tower of the Catedrala Naşterea Domnului, as well as improvements in public transport. From 1994, Chișinău saw the construction and launch of new trolley bus lines. 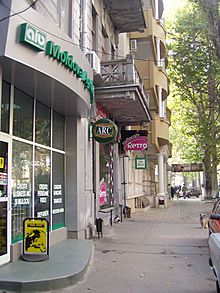 Street and businesses in city centre

Chișinău is the most economically-developed and industrialised city in Moldova. Chișinău is a major industrial and services centre; its main industries include consumer and electrical goods, building materials, machinery, plastics, rubber, and textiles. The main service fields are banking and shopping/commerce.

The city has thirty-six universities, and the Academy of Sciences of Moldova. Since the collapse of the Soviet Union, the city has become a relatively lively and well-provisioned capital, with a much higher standard of living than most rural areas.

All content from Kiddle encyclopedia articles (including the article images and facts) can be freely used under Attribution-ShareAlike license, unless stated otherwise. Cite this article:
Chișinău Facts for Kids. Kiddle Encyclopedia.