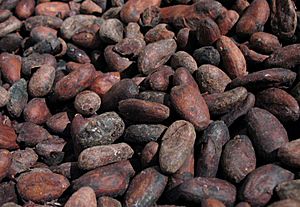 Chocolate liqueur is a liqueur that tastes like chocolate.

There is mention, in French, of producing and selling chocolate en liqueur as early as 1666. Context suggests this is a chocolate liqueur, not a chocolate liquor or cocoa bean extract nor any other chocolate flavored beverage. In New England prior to the 18th century American Revolution, a "chocolate wine" was popular. Its ingredients included sherry, port, chocolate, and sugar. A French manual published in 1780 also describes chocolate liqueur. An 1803 French pharmacy manual includes a recipe for a chocolate liqueur (ratafia de chocolat, also ratafia de cacao). An early 19th-century American cookbook, published in 1825 and preserved in an historical archive in South Carolina, includes a similar recipe. Throughout the 19th century and into the early 20th century, manuals and encyclopedias in French, English, and Spanish give similar recipes. A late 19th century food science manual gives a recipe that includes techniques for clarifying and coloring the liqueur. A similar early 20th century manual gives four recipes.

In 1994, there were several brands of chocolate liqueur on the market; this is attributed to a 1990s "chocolate craze".

Chocolate liqueur can be consumed straight, as an after dinner drink rather than as aperitif. It is used in mixed drinks and in desserts, especially in dessert sauces, cakes, and truffles. A food writer notes that many recipes for chocolate truffle add a small amount of chocolate liqueur to melted chocolate, and warns that adding the liqueur often causes the chocolate to seize. One of the more unusual uses is in chocolate rolled fondant.

Arguably the most controversial use may be in connection with a scandal concerning the provenance of certain 17th century bottles of wines said to have belonged to Thomas Jefferson, and traded by Hardy Rodenstock. Benjamin Wallace writes in his book The Billionaire's Vinegar that at a wine tasting of 19th century wines from Château Latour, provided by Rodenstock, several people noted the wines had a flavor of chocolate liqueur and were fakes. Wine and chocolate are a classic flavor pairing, and this is reflected in some cocktails that combine a strong red wine with a dash of chocolate liqueur.

Crème de cacao may be either clear or a dark caramel color, which is often labeled dark crème de cacao. The French word crème identifies it as a crème liqueur, a liqueur with a high sugar content as stipulated by various regulations (for example, European law requires a sugar content of 250 g/l). There is no dairy cream in it.

All content from Kiddle encyclopedia articles (including the article images and facts) can be freely used under Attribution-ShareAlike license, unless stated otherwise. Cite this article:
Chocolate liqueur Facts for Kids. Kiddle Encyclopedia.