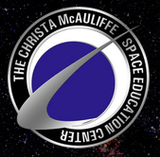 The center, named for educator Christa McAuliffe, killed in Challenger disaster, was started in 1990 by Victor Williamson, an educator at Central Elementary School. It is a 4,000-square-foot (370 m2) building added onto Central Elementary. It aims to teach astronomy and social studies through the use of simulators; the first, Voyager, proved itself popular. As the years passed, the demand for flights expanded and new ships were commissioned. In October 2012, the space center was temporarily closed at Central Elementary, but re-opened following several district-mandated upgrades, closures, and maintenance procedures in Spring 2013. The original simulators, along with the school that housed them, was demolished on May 5, 2020 to make way for a new space center built behind the original property.

The simulators employed by the center have included the following (in order of original construction):

Each simulator has its own plaque. The plaque displays the ship's names and other things about that specific simulator. Some are inside the simulator, and some of them are hidden out of plain sight.

Most missions are based on, or at least contain aspects similar to the Star Trek universe. The Simulators themselves are replicas of Star Trek ships and various races (like the Romulans) are often involved in missions.

The center, and its founder were honored in a ceremony in its 15th year by many individuals, including Gary Herbert, the Lieutenant Governor of Utah. At that time, with its five spaceship simulators, it was educating 16,000 students a year.

The center's mission statement is A Utah Arts, Sciences, Technology Education Initiative. We Practice the Discipline of Wonder.

The Space Center uses it simulators in order to create interactive stories, usually applicable to historical events, in which the students are involved.

Students also learn and apply different aspects of astronomy and science in missions. They get the chance to learn about black holes, nebulae, asteroids, planets, planetary systems, moons, and a variety of other phenomena.

Students who attended the Space Center 15 years ago are now pursuing fields in science, technology, space exploration, programming, and electrical engineering. Students at the local Brigham Young University have the opportunity to develop consoles and equipment for the Space Center; gadgets such as Tricorders, touch panel equipment, fiber optics systems, ships, and digital/analog control interfaces all help to give a more realistic effect to the experience.

The center's staff hopes that its visitors are tomorrow's scientists.

The Space Center employs technologies and equipment to achieve its simulations. In each ship, there is a powerful sound system (including a powerful bass response to simulate the feeling of the reactor core) hooked up to an industry standard mixing board which combines input from a combination of sound sources heard through the main speakers, such as, sound effects, music, DVD players, CD players, microphones, and voice distorters.

The video system is just as complex. Each mission available has a story DVD with clips compiled for scenes in a story and other visual effects. These video sources are all controlled by a video switcher so that it appears to be a seamless video. In addition to movie clips, the Space Center also makes its own tactical screens. Tactical screens are in essence complex power points that can be networked to display real time information about the ship. This information may include information about things related to the current story such as ship systems while others may be maps or other mission information. Various programs have been used to create these screens including HyperCard and Runtime Revolution.

Each simulator is also equipped with a lighting system allowing both red and white lights to be displayed; red during alerts and white during normal alert levels. Each set of lights is attached to a dimmer in the control room allowing the lights to manually fluctuate in different events during a mission, such as a torpedo impact or power failure. The most advanced set of lights at the Space Center is installed in the Galileo. The lighting system in the Galileo is capable of being controlled via computer making effects seem more realistic.

In order to ensure that campers are safe, a network of closed circuit cameras is also installed at key points on the set to monitor their positions. Each simulator has part of the bridge and connected areas of the set monitored at all times.

The most complex part of each simulator is the computer systems. Each ship has several computers installed. The smallest set, the Galileo, has five, while the largest set, the Magellan, has 16. Each one of these computers (excluding sound effect computers and tactical [main viewer] computers) is connected to a network allowing communication between computers. In this way, the programs on each of the computers are also able to communicate with each other, allowing the control room to monitor the simulation and for computers on the bridge to update each other with information sent from the control room. The programming on each of the computers used to be programmed in HyperCard, which was in use on the USS Voyager until the simulator was decommissioned. Later however, the Space Center switched to Revolution by Runtime Revolution. The next generation of programs at the Space Center were programmed in Cocoa, Apple Inc's own programming language for their Macintosh computer platform. Since 2018, the space center has used the Thorium open-source starship simulator platform, developed by a former volunteer.

Private donations paid for the simulators, while the school district pays the salary of the center's director. 181 volunteers and part-timers help to operate the simulators.

The Space Center's full-time employee are the Director, Flight Directors, and Bridge Supervisors. The volunteering organization is divided into guilds and classes of volunteers as follows:

(Note: All of the classes of Volunteers above except for the regular Volunteers have their own guild ((e.g. The Flight Director's Guild)))

The Space Center offers a variety of programs that provide varying mission lengths and experiences. Continuing the educational aim of the Space Center, there are programs for school classes that provide education about science, space and teamwork/leadership. These programs also offer educational experience missions on the simulators. For the general public, there are also private missions, overnight camps, "Super Saturdays" and summer camps. Private missions are available to be reserved in 2 lengths: 2.5 hour and 5 hour missions. These time blocks include time for briefing and training in preparation for the actual mission on the simulator. Overnight camps used to start on Friday nights and end on the following morning: all missions are 'paused' for the night, campers sleep at the Space Center overnight, and then missions are resumed in the morning. These missions however, are no longer available. Super Saturday camps provide the same missions as overnight camps, but occur during the day on Saturdays. These camps are only offered from August to May. The Leadership Camp is made for an older audience of ages 15–17. It differs from the other summer camps in the way that the whole camp is a campaign and every mission is part of a bigger picture. Summer camps usually happen over 3 days with campers returning home to sleep. These are the longest available camps. The Space Center provides further information on their website, http://spacecenter.alpineschools.org/

All content from Kiddle encyclopedia articles (including the article images and facts) can be freely used under Attribution-ShareAlike license, unless stated otherwise. Cite this article:
Christa McAuliffe Space Education Center Facts for Kids. Kiddle Encyclopedia.