Church of St John the Baptist, Frome facts for kids

The Church of St John the Baptist, Frome is a parish church in the Church of England located at Frome within the English county of Somerset. It is a Grade II* listed building.

The first church on the site was built by Aldhelm in the late 7th century. Major building work was undertaken in the 12th, 13th and 14th centuries with little remaining of the Norman and Saxon structures. In 1852 the controversial priest William James Early Bennett was appointed as the vicar and undertook major changes both in the organisation of the parish and the fabric of the church.

The restoration by Charles Edmund Giles included stained glass by Charles Eamer Kempe and statuary by James Forsyth. The entrance to the church passes a holy well and stone-sculptured Via Crucis (Way of the Cross) depicting seven scenes from the Stations of the Cross. It is unique in the Anglican church in England. 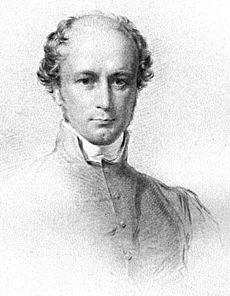 The parish church of St John the Baptist, with its tower and spire, was built between the late 12th century and early 15th century replacing a Saxon building that had stood since 685 AD. The first church of St John the Baptist ('in honorem sancti Johannis Baptista') had been established when Aldhelm obtained a grant from Pope Sergius I to establish a foundation of mission priests to spread the faith in Selwood Forest. William of Malmesbury stated that the church was still there in 1125. By the second half of the 11th century the church was under the control of Regenbald. Nothing remains of the original church apart from some fragments of masonry; these are fragments, close to the entrance of St Andrew's Chapel, of what may have been crosses. The location of the first Saxon church is unknown, though it is likely to have shared the same rocky platform as the present church, located between two streams running down the hill on either side, what are now Blindhouse Lane and Gentle Street. When the church was being restored from the 1850s, foundations of arcades and possible Saxon interments were found, but these were quickly covered so the rebuilding was not delayed. The fabric of the current church was built in the 12th, 13th and 14th centuries but largely rebuilt in the 19th.

Around 1418 William Starke was the vicar. In the 1540s separate chantry chapels to St Andrew, St Nicholas and Our Lady were established.

The controversial priest William James Early Bennett was appointed as the vicar in 1852. Bennett is celebrated for having provoked the decision that the doctrine of the Real Presence is a dogma not inconsistent with the creed of the Church of England. As a leading member of the Oxford Movement he had served as vicar to various churches in London but resigned in 1851, following doctrinal complaints and a theological dispute with his bishop, Charles Blomfield - after being accused of ritualism. His publication The Old Church Porch (1854–1862), issued at Frome, is sometimes cited as being in effect the first parish magazine, although this claim has been disputed.

Within a few years of Bennett's arrival the system of pew privilege, by which the wealthy bought their pews was abandoned and many of the pews and the galleries were removed. He also divided the parish into 12 districts and established schools, classes, a dispensary and other charities for the population. He set up a choir school for 12 boys and creches for the children of the town's factory workers. He bought some of the properties surrounding the church for the school, which is now used as the church hall and known as the Bennett Centre. 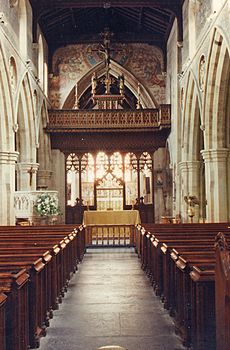 The altar and reredos

The chancel was restored in 1844 and further restored in the 1850s and 1860s by C. E. Giles, which entailed almost total rebuilding. Bennett employed the sculptor James Forsyth to carve statues of saints, the reredos and 18 medallions. Forsyth was also responsible for the carving of the Via Crucis alongside the steps on the north side of the church.

It was designated as a Grade II* listed building in 1983.

The parish and benefice of Frome (St John the Baptist) is within the archdeaconry of Wells and the Diocese of Bath and Wells. 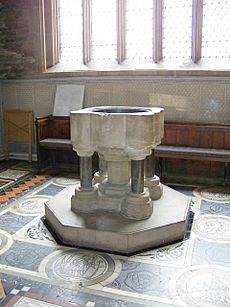 The font surrounded by a pavement showing the seven virtues and seven deadly sins.

The church contains a chancel, Lady chapel and baptistery and has a 7 or 8 bay nave. Fragments of Norman work are left including carved stones at the base of the tower and parts of the arch into the Lady Chapel.

The interior is elaborately adorned with sculptures and stained glass, most of which is by Charles Eamer Kempe. The font was moved from St Andrew's Chapel to the Chapel of St Nicholas which became the baptistry. It is surrounded by a pavement showing the seven virtues and seven deadly sins. There are brass gates to the Chancel and a forged metal screen to the Lady Chapel, complete with gas lamp feature, both locally manufactured by John Webb Singer. There is a fine brass lectern and brass candlesticks in the church, but it is uncertain that these are Singer products; he did make such items for the church, but there has been some clearance of excess Victorian items.

Outside the east end of the church is the tomb of Thomas Ken (July 1637 – 19 March 1711) who was an English cleric who was considered one of the fathers of modern English hymnology and the most eminent of the seven Bishops who refused the oath of Indulgence 1689 to William and Mary and was consequently deprived of his See of Bath and Wells. Hence the symbolism: an empty grave, and empty coffin, outside the church. He is remembered in the Church of England with a Lesser Festival on 8 June. Ken is honoured with a feast day on the liturgical calendar of the Episcopal Church (USA) on 20 March. 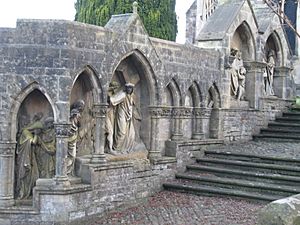 The Via Crucis (Way of the Cross) is unique and stone-sculptured. It was added in the 1860s, when several buildings were demolished to make way for it. The carvings by James Forsyth depict seven scenes from the Stations of the Cross. The first shows Christ being condemned by Pontius Pilate, while the second is Christ carrying his cross. The third sculpture illustrates Christ falling under his cross, supported by Simon of Cyrene. The next tableau is of Christ meeting his mother and then having his clothing removed. The final representations as you climb the steps towards the church are of Christ being nailed to the cross and then his death, which is displayed on the gable of the north porch.

In the southwestern corner of the churchyard a well rises. This is used as a site for well dressing each year in May.

The screen and gates at the entrance to the forecourt of the church was built in 1814 by Jeffrey Wyatt.

The church has a large three manual pipe organ. The earliest parts of the organ date from ca. 1680 by Renatus Harris, but there is later work by Young, Richard Seede and Vowles. In 1923 the organ was rebuilt by William Hill & Sons and Norman and Beard.

All content from Kiddle encyclopedia articles (including the article images and facts) can be freely used under Attribution-ShareAlike license, unless stated otherwise. Cite this article:
Church of St John the Baptist, Frome Facts for Kids. Kiddle Encyclopedia.