Church of St Mary the Virgin, Aldermaston facts for kids

The Church of St Mary the Virgin, Aldermaston, is the Church of England parish church of Aldermaston in Berkshire. The church, which is dedicated to St Mary, dates from the mid-12th century and has examples of Norman and Jacobean architecture. The building has had a number of extensions, particularly in the 13th, 14th, 15th and 17th centuries.

The Church of England parish church was built in the mid 12th century. The Norman building was altered throughout the following millennium. The 12th century building now comprises the current nave, with additions seen in the Forster Chapel and chancel (13th century), the steeple (14th century), and vestry (17th century). The 17th century Jacobean pulpit is an unusual heptagonal design. Various additions were made to the structure in the 14th and 15th centuries, primarily to the walls and ogee windows. A scratch dial was added to the south-west buttress in the 14th century.

St Mary's Church was established in the 12th century, and has seen numerous additions and increases in size

In 1896 Charles Keyser oversaw and funded the church's renovation, which was guided by Edward Doran Webb. Alongside the routine repairments to paving and roofing, the renovation uncovered evidence of an early water drainage system in the sill of a window. This was converted into a piscina. Also, the repairs to the walls of the nave showed that they were lined plaster upon a wooden framing – this was removed, and after repairs, the walls were decorated with tempera artwork. The stained glass in the chancel is the work of C.E. Kempe.

Further repair work to the roof and tower was undertaken in the 1950s, with surveying overseen by Frederick Ernest Briant Ravenscroft of Reading. Ravenscroft was in his 70s when the work began and died before the work was finished. The completion documents were signed off by his fellow architect George William Judd. The church font dates from the mid 19th century, and the lectern is a memorial to the Second World War.

On 11 September 2010, the church was opened to the public as part of the Heritage Open Days scheme. The current [[ Rector (ecclesiastical)|rector]] is Jane Manley.

The south transept of the church was added in the 13th century. Now called the Forster Chapel, the lady chapel contains the alabaster effigial monument of Sir George Forster and his wife Elizabeth, which was built in 1530. Part of the effigy was damaged when part of the church's roof collapsed; George's face, however, remained undamaged. The chapel may originally have been a chantry dedicated to St Nicholas.

The two roundels in the north window portray the Annunciation the Coronation of the Virgin. These date from the 13th century and are the oldest glass in Berkshire.

The church tower has a ring of eight bells. The oldest are the fourth and sixth bells, which were founded in 1681 by Henry Knight of Reading. The seventh dates from 1786 and was made by W & T Mears of the Whitechapel Bell Foundry. The third and fifth were cast by Mears in 1860. The second bell was cast by Warner in 1895, with the treble and tenor bells being cast five years later.

Between 1900 and 2005 the church rang 210 peals. In 1977, the church rang a quarter-peal (1260 changes) of Plain Bob Doubles for the Silver Jubilee of Elizabeth II. On 9 July 1979, a peal of Grandsire Triples was run to mark the Queen and the Duke of Edinburgh's visit to AWRE. A peal of Oxford Bob Triples was rung in on 15 November 1980 to commemorate the new vicar, Richard Millar. The peal lasted 2 hours and 47 minutes. 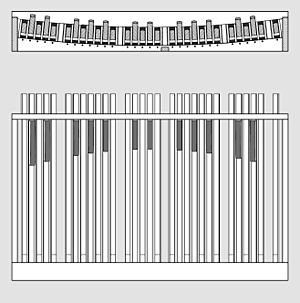 Diagram of a concave-parallel pedalboard layout, similar to the one in Aldermaston

The present organ at St Mary's church is located in the south chancel and was built in 1880 by Martin & Coate of Oxford. The organ has 16 stops, with pipes of spotted metal (an alloy of lead and tin):

The organ has four couplers – swell to pedal, swell to great, swell octave to great, and great to pedal. The wind system uses a Discus electric blower. The pedal keyboard is laid out in a concave-parallel design.

In 1938, the tremulant was added to the swell division. In addition to this, the swell to great coupler was changed and detail to the console was added. In 1997, the organ was cleaned and renovated by Foster Waite of Newbury, but no changes were made. The organ has a "twin" located in Chesterton parish church, near Bicester in Oxfordshire.

Maria Hale (occasionally written as Martha Hale) was born in 1791, and lived in Park Cottage on the edge of the court's parkland. It was rumoured that she was a witch, and would turn herself into a hare and sit outside the Falcon pub in Tadley to learn gossip. The hare was shot in the leg by the gamekeeper, and Hale reportedly had a limp thereafter. Other rumours suggest that she cursed villagers' gardens when they refused her request for flowers, and that she bestowed illness upon her son when he left home for Windsor so that he would return.

The United Kingdom Census of 1871 listed Hale as living in Mortimer. At that time the census divided the county into subdivisions, and Aldermaston was within the Mortimer division. She died 8 years later in 1879, and was buried south-west of the church's entrance beside a yew tree. Her coffin was supposedly weighed down with stones and bricks, and the gravediggers jumped on the grave to ensure that she would never rise. It is rumoured that placing a pin in the church door and running around the church three times will summon her ghost.

Charles Keyser, Daniel Burr, and John Stair are buried in the Aldermaston churchyard.

All content from Kiddle encyclopedia articles (including the article images and facts) can be freely used under Attribution-ShareAlike license, unless stated otherwise. Cite this article:
Church of St Mary the Virgin, Aldermaston Facts for Kids. Kiddle Encyclopedia.