Until the industrial revolution, the current City Centre represented the full extent of the City of Dundee, Scotland. Now roughly encircled by the market gait dual carriageway, the city centre is now the main shopping and commercial district. Unlike the city centre of Glasgow, many of the city centre's streets (especially in the southern and eastern quarters) are not built on a grid plan and in that way have more in common with the street plan of the Old Town of Edinburgh (although most buildings in Dundee's city centre date from the 19th century or later).

The modern city centre is still divided into the six medieval thoroughfares: the Seagait, Murraygait, Nethergait, Overgait, Wellgait and the Cowgait (“Gait” being an old Scots word for street) which all remain today, although the “Overgate” and “Wellgate” are now enclosed shopping centres. Many of the medieval closes were demolished in the late 19th Century to make way for larger and grander Victorian streets. However the area to the north of the city centre between Meadowside, Ward Road and the Marketgait is mostly based on a grid system with wide avenues and crescents, due to much of this area being planned and designed in the Victorian era. 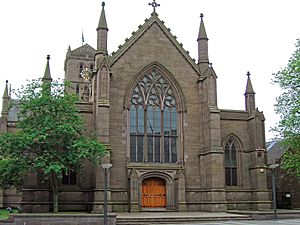 Dundee Parish Church, St Mary's is one of two of the city's City Churches

At the heart of the city centre is the City Square, home to two of Dundee’s principal cultural venues; the Caird Hall, the Marryat Hall along with the City Chambers and other businesses. The multi-storey Tayside House, completed in 1976 to accommodate the then new Tayside Regional Council, and latterly the main headquarters of Dundee City Council, was located directly behind the City Square. It was demolished in 2013 as part of the redevelopment of the waterfront area, with the council HQ moving to Dundee House. 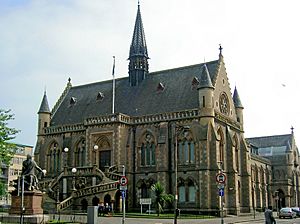 Many of Dundee’s public statues are scattered throughout the neighbourhood, subjects include Robert Burns, Queen Victoria, Admiral Duncan, the Strathmartine Dragon, James Carmichael, Desperate Dan and Minnie the Minx, there is also a plaque to William Wallace, on the supposed site where he began his war for independence by murdering the son of the English governor, sheriff or magistrate of Dundee after he had made a constant habit of bullying him and his family, although this local folk tale may or may not be true, it is known that that St Paul’s Cathedral, where the plaque is located is the site of Dundee’s old castle, which the army of Wallace and Andrew Moray laid siege to early in the Wars of Scottish Independence.

In 2000 a major public consultation into the future of the waterfront was conducted to coincide with the partial redevelopment of the Seabraes area (including the new Science Centre). A masterplan was developed, with infrastructure work being undertaken (including strengthening of the railway tunnel) in 2006. In 2009 one of the major elements of the redevelopment was begun: the realignment of the A92 Tay Road Bridge offramps. The opening of a new museum and gallery - V&A Dundee - was announced in 2010. Removal of several key structures including Tayside House, the Hilton Hotel and Casino, the 1970s entrance buildings to the railway station, the Olympia Leisure Centre (relocated to East Marketgait) along with associated pedestrian overbridges, was completed in 2013. The project as a whole is expected to be complete by 2017.

360° view of Dundee City Centre seen from the High Street

All content from Kiddle encyclopedia articles (including the article images and facts) can be freely used under Attribution-ShareAlike license, unless stated otherwise. Cite this article:
City Centre, Dundee Facts for Kids. Kiddle Encyclopedia.