The cityscape of Tampa includes historic and architecturally noteworthy structures in its downtown and residential areas. The Seminole Heights and Hyde Park neighborhoods are two of the largest historic preservation districts in Tampa.

Skyline of Tampa near sunrise

Skyline of Tampa in the morning

In 1891, Henry B. Plant built a lavish 500+ room, 1⁄4-mile-long (400 m), US$2.5 million eclectic/Moorish Revival-style luxury resort hotel called the Tampa Bay Hotel among 150 acres (60 ha) of manicured gardens along the banks of the Hillsborough River. Plant's resort featured a race track, a heated indoor pool, a golf course, a 2,000-seat auditorium, tennis courts, stables, hunting and fishing tours, and electric lights and telephones in every room, plus the first elevator in town and exotic art collectibles which Plant had shipped in from around the world.

The Tampa Bay Hotel was relatively prosperous for about a decade. The resort hosted thousands of guests and many celebrities of the era, but was only filled to capacity during the Spanish–American War (see below). Henry Plant died in 1899, and his heirs sold the facilities to the city of Tampa in 1904. The city operated the hotel and used the grounds as a community gathering place until 1932, when the resort was closed, remodeled, and reopened as the University of Tampa a year later.

Meanwhile, with characteristics of its own, the New Tampa district contains several upscale neighborhoods. They include Hunter's Green, West Meadows, Hunter's Key, and Tampa Palms.

The tallest buildings in Tampa are all in downtown.

Tampa skyline in the morning

The Tampa skyline from the Sunshine Skyway Bridge 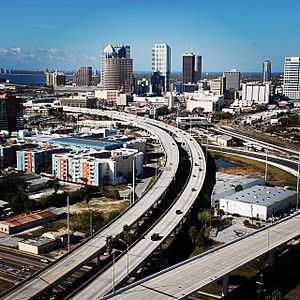 Along the city's western shore, three bridges span Old Tampa Bay carrying vehicular traffic to and from Pinellas County: the Howard Frankland Bridge (I-275), the Courtney Campbell Causeway (SR 60), and the Gandy Bridge (US 92).

Tampa is served by two major limited access toll road expressways. From its suburban eastern terminus of Brandon, the Lee Roy Selmon Expressway (SR 618) enters Tampa by way of a bridge crossing the Tampa Bypass Canal. It is a major commuter artery into downtown and continues down the South Tampa peninsula, ultimately reaching its western terminus at Gandy Boulevard (U.S. Route 92) near MacDill Air Force Base.

Three Interstate Highways pass within the city limits. Interstate 4 originates from Tampa's Malfunction Junction, where it intersects Interstate 275. I-275 is a main artery into the city from Pinellas County, and continues into downtown and northward through neighborhoods like Seminole Heights and Sulphur Springs before leaving Tampa to reunite with Interstate 75 at the Pasco county line. Immediately south of this junction, I-75 crosses through the city neighborhood of New Tampa. 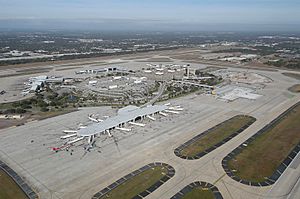 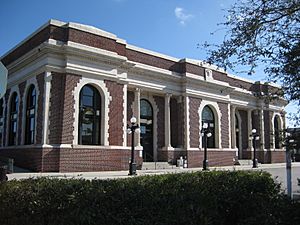 The railroad legacy brought to Tampa by Henry Plant continues to serve the city. Uceta Rail Yard was established by Plant System corporate descendant, Atlantic Coast Line Railroad, in the Gary industrial sector on Tampa's east side, near Brandon. It continues to service CSX as a storage and intermodal freight transport facility today. Freight and container cargo operations at the city's seaports also depend upon dockside rail facilities.

Tampa's intercity passenger rail service has since 1912 been based out of Tampa Union Station. The historic facility, adjacent to downtown between the Channel District and Ybor City, is serviced by Amtrak today. Amtrak's Silver Star calls on Tampa twice daily: number 91 southbound to Miami and number 92 northbound for New York City.

Union Station also serves as the transfer hub for Amtrak Thruway Motorcoach service, offering bus connections to several cities in Southwest Florida, as well as to Orlando for transfers to the northbound Silver Meteor. 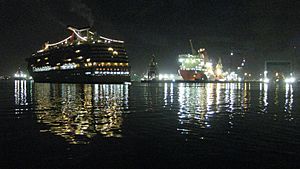 Early morning at the Port of Tampa

Since Tampa Bay was first spotted by Spanish explorers in the 16th century, sailors have admired its wide, sheltered beauty. But it had a problem; it's naturally very shallow - less than 30 feet (9 m) deep almost everywhere and well less than that in many places near the coast, including the approach to the small town of Tampa. By the late 19th century, typical cargo ships had grown large enough that they were not able to navigate upper Tampa Bay and reach the ports of Tampa at all.

In 1899, however, the US Congress authorized the dredging of a 27' deep channel to Port Tampa, Henry Plant's rail-to-ship facility just west of Tampa. In 1917, another channel was dredged out to the Port of Tampa proper, instantly making Tampa an important shipping location.

The bay bottom is very sandy and the ship channels need constant dredging to keep them navigable to the largest modern cargo ships. Every year, the US Army Corps of Engineers dredge up enough sediment from the bay to fill Raymond James Stadium 10 times.

Today, the Port of Tampa is the largest port in Florida in throughput tonnage, making it one of the busiest commercial ports in North America. Petroleum and phosphate are the lead commodities, accounting for two-thirds of the 37 million tons of total bulk and general cargo handled by the port in 2009.

The Tampa Port Authority currently operates three cruise ship terminals in Tampa's Channel District. The Port of Tampa is home port year round for Carnival Cruise Lines' MS Carnival Inspiration and MS Carnival Legend. Tampa in 2010 will also be the seasonal home to Holland America Line's MS Ryndam, as well as Royal Caribbean International's MS Grandeur of the Seas and MS Radiance of the Seas. Cruise itineraries from Tampa visit the Eastern and Western Caribbean islands, Belize, and Mexico. 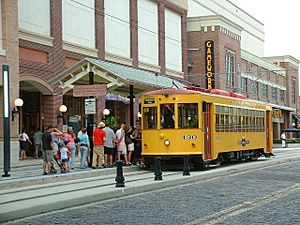 A TECO streetcar picking up passengers in Ybor City.

Mass transit within Tampa is operated by the Hillsborough Area Regional Transit Authority (HART), and includes a public bus system and a streetcar line. HART has a signed transit deal with the University of South Florida, allowing students to ride for free on most bus routes, while students from other schools may receive discounted fares.

In October, 2002, the TECO Line Streetcar System brought electric streetcar service back to Tampa for the first time in over half a century. The line operates from ten stations along a 2.4 mile (3.9 km) route, connecting Ybor City, the Channel District, the Tampa Convention Center, and downtown Tampa. The TECO Line Streetcar extension along Franklin Street to the Fort Brooke Parking Garage was completed in December 2010.

Drawing inspiration from the streetcars that traversed Tampa between the late 19th and mid 20th centuries, the TECO line cars include varnished wood interiors and other nostalgic appointments. Though they may appear old-fashioned, the modern fleet of cars are wheelchair accessible and air conditioned, offering increased comfort for Tampa in the 21st-century.

All content from Kiddle encyclopedia articles (including the article images and facts) can be freely used under Attribution-ShareAlike license, unless stated otherwise. Cite this article:
Cityscape of Tampa, Florida Facts for Kids. Kiddle Encyclopedia.