Civilization is a series of turn-based strategy video games first released in 1991. Sid Meier developed the first game in the series and has had creative input for most of the rest, and his name is usually included in the formal title of these games, such as Sid Meier's Civilization. There have since been six main games in the series, a number of expansion packs and spin-off games, as well as board games inspired by the video game series. 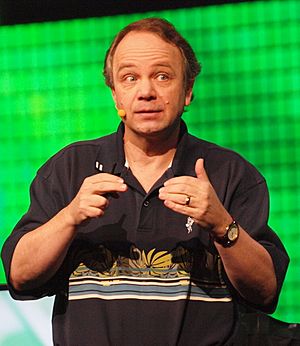 Sid Meier, who conceived the Civilization series and co-founded Firaxis

The main Civilization games are turn-based 4X games, where players attempt to achieve one of several victory conditions against other human and computer-controlled opponents through the actions of "eXplore, eXpand, eXploit, and eXterminate". Civilization uses historical aspects from the development of mankind's civilization, and turns take place over a time scale that starts with the dawn of civilization in the millennia before 1 A.D., and continue through present times and beyond.

To help newer players, the Civilization games include a number of artificial intelligence advisors that suggest which units, city improvements, and technology and cultures they should invest in based on the current state of the game.

The Civilization games can be played in a single-player mode, and both local and online multiplayer modes, along with a number of computer-controlled opponents.

All titles in the series share similar game-play, centered on building a civilization on a macro-scale from prehistory up to the near future.

The first version, Civilization, was released in 1991, and games have been released ever since.

In 1996, Next Generation listed the series as number 4 on their "Top 100 Games of All Time", commenting that, "[Sid Meier's] goal was to give players the chance to play God. And he succeeded, admirably."

These are the versions of the game. They are in order from oldest to newest.

All content from Kiddle encyclopedia articles (including the article images and facts) can be freely used under Attribution-ShareAlike license, unless stated otherwise. Cite this article:
Civilization (series) Facts for Kids. Kiddle Encyclopedia.