Kids Encyclopedia Facts
This page is about the non-metropolitan county that existed 1974-1996. For other uses, see Cleveland (disambiguation).

Cleveland is an area in the north-east of England. Its name means literally "cliff-land", referring to its hilly southern areas, which rise to nearly 1,500 ft (460 m). Historically, Cleveland, as a geographic area within the North Riding of Yorkshire, was located entirely to the south of the River Tees and its largest town was Guisborough, until the rise of Middlesbrough in the 19th century.

A non-metropolitan county of Cleveland was created in 1974 under the Local Government Act 1972, named after the historic region, but not covering it all, and also including land north of the River Tees that had until then been in County Durham. It was situated around the Teesside urban area and included Middlesbrough, Stockton-on-Tees, Hartlepool and Redcar. The Bill as originally presented in November 1971 intended the county to be called "Teesside".

The county was abolished in 1996 with its boroughs becoming unitary authorities and the Tees re-established as the border between North Yorkshire and County Durham for ceremonial purposes only.

Cleveland has a significant industrial heritage arising from its central role in the 19th century iron boom that led to Middlesbrough growing from a hamlet into a major industrial town in only a few decades. The Cleveland Hills, in the southern part of the district, were key suppliers of the ironstone that was essential to the running of the blast furnaces alongside the River Tees. Middlesbrough's Teesport is still one of the United Kingdom's main ports and the area between Middlesbrough and Redcar is still populated by many heavy industrial plants, although this is much reduced from its 20th century peak.

Between 1974 and 1996 most of Cleveland was incorporated into a non-metropolitan county of the same name, formed from parts of the North Riding of Yorkshire and County Durham. Unlike the traditional geographic area, the county was formed around the Tees estuary and included lands on both sides of the river. It excluded the southernmost parts of traditional Cleveland, including much of the Cleveland Hills, although the original proposal for this county was much larger and covered the coast down including Whitby and the Whitby Rural District.

The county was called "Cleveland", instead of "Teesside" as originally proposed in the Local Government Bill, due to fears in areas not part of the old Teesside county borough that it represented a takeover. It was formed on 1 April 1974, from the former county boroughs of Teesside and Hartlepool, the Stockton Rural District from Durham, and from the North Riding of Yorkshire, the urban districts of Guisborough, Loftus, Saltburn and Marske-by-the-Sea and Skelton and Brotton, along with some parishes from Stokesley Rural District.

The four districts of the County of Cleveland were Hartlepool, Langbaurgh-on-Tees, Stockton-on-Tees, and Middlesbrough. The county town was Middlesbrough. It had a total area of 225 square miles (583 km²) and an estimated population of 567,600 in 2000. The county bordered County Durham to the north and North Yorkshire to the south, and it faced the North Sea to the east.

Cleveland was one of the areas in the first tranche of reviews conducted by the Banham Commission. The Commission's final recommendations, accepted by the government, were that each of the districts should be made a unitary authority, and additionally that the Tees should be re-established as a ceremonial border. This was fiercely contested by Cleveland County Council, who applied for judicial review over the decision. According to the Minister, David Curry, in the Commons debate on the order on 11 January 1995, this caused a delay from 1 April 1995 as the reorganisation date to 1 April 1996.

As the first of the Orders to be laid before Parliament, it was done in two stages. The Cleveland (Structural Change) Order 1995 had the main effect of abolishing the County Council, whilst The Cleveland (Further Provision) Order 1995 abolished the actual county, creating four new (non-metropolitan) unitary authorities coterminous with each of the boroughs. A division was forced by the Opposition, on the first Order, with 310 in favour and 223 in opposition. Of Cleveland's 6 MPs, Mo Mowlam and Frank Cook (both Labour) voted against, with Tim Devlin and Michael Bates (both Conservative) voted for. Stuart Bell and Peter Mandelson (both Labour) were present at the debate but did not vote.

On 1 April 1996, the Orders came into force. The district of Langbaurgh-on-Tees was renamed Redcar and Cleveland, the County of Cleveland was abolished, and four unitary authorities created. The post of Lord Lieutenant of Cleveland was abolished, with the area being split between the ceremonial counties of Durham and North Yorkshire. However, Cleveland Police and other institutions covering the four boroughs, were retained. The area (sometimes including Hartlepool) is known as 'Teesside' for some purposes, and with Darlington the term Tees Valley is becoming more popular in the press and with local government, although it continues to be generally unused by the actual residents of this area.

Cleveland is a Church of England archdeaconry, in the Diocese of York. It covers a large area including Middlesbrough, Thirsk, Pickering and Whitby. 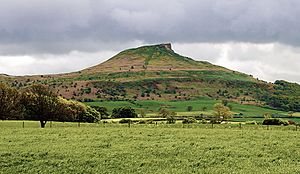 Roseberry Topping, one of the most enduring symbols of ancient Cleveland.

The area is extremely varied geographically. The Tees estuary is highly industrialised and urbanised. Much of the remainder of the lowland parts of Cleveland is farmland. East Cleveland marks the northern end of the chain of cliffs that runs along the North Yorkshire Heritage Coast. South Cleveland is extremely hilly, forming the escarpment of the North York Moors. One of the best known symbols of Cleveland is the distinctive hill of Roseberry Topping, which overlooks Newton under Roseberry on the Great Ayton to Guisborough road. Its original roughly conical form was undercut by extensive mining, giving it a jagged appearance that many have thought reminiscent of the Matterhorn mountain. 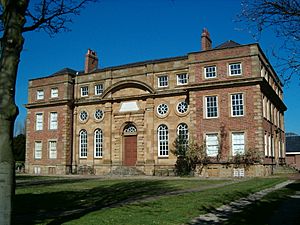 Cleveland is twinned with:

All content from Kiddle encyclopedia articles (including the article images and facts) can be freely used under Attribution-ShareAlike license, unless stated otherwise. Cite this article:
Cleveland, England Facts for Kids. Kiddle Encyclopedia.