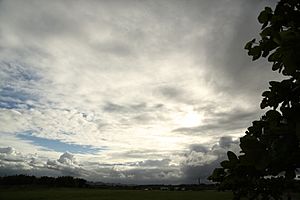 Clouds over Parque Ecológico in Dorado

The climate of Puerto Rico in the Köppen climate classification is predominately tropical rainforest. Temperatures throughout the year are warm to hot, averaging near 85 °F (29 °C) in lower elevations and 70 °F (21 °C) in the mountains. Easterly trade winds pass across the island year round while the rainy season stretches from April into November. The relatively cool trade winds are blocked by the mountains of the Cordillera Central which causes rain shadows and sharp variations in the temperature and wind speed over short distances. About a quarter of the average annual rainfall for Puerto Rico occurs during tropical cyclones, which are more frequent during La Niña years.

Temperatures range from 70 to 90 °F (21 to 32 °C) in the lower elevations, while higher elevations in the central part of the island experience temperatures between 61 and 80 °F (16 and 27 °C) year round. The temperature in the south is a few degrees higher than the north. Between winter and summer, there is only a temperature swing of around 6 °F (3.3 °C). This is mainly due to the warm waters of the tropical Atlantic Ocean, which significantly modify cooler air moving in from the north and northwest, Coastal Waters Temperatures around the years is about 75 °F in February to 85 °F in August. The highest temperature ever recorded was 103 °F (39 °C) at San Lorenzo, while the lowest temperature ever recorded was 38 °F (3 °C) at Aibonito.

Persistent 19-knot (35 km/h; 22 mph) trade winds move from east to west across the island year round. In lighter wind regimes, sea breeze and land breeze circulations dominate. Higher winds occur in the vicinity of tropical cyclones, which pass by every five years.

There is a pronounced rainy season from April to November. Due to the commonwealth's topography, rainfall varies greatly across the island. Pico del Este averages 171.09 inches (4,346 mm) of rainfall yearly while Magueyes Island averages only 29.32 inches (745 mm) a year.

Summer is hot and humid with thunderstorms in the afternoon, especially in August and September. Trade winds bring cool summer breezes in the north and east of Puerto Rico, but due to the topography of the island, these winds do not reach the coast south and west, causing much higher temperatures than in the north. During humid summer days, the heat index can reach 115 °F (47 °C) and actual temperatures can reach 100 °F (38 °C). Sometimes the wind shifts from the south, causing an inverse, where the heat south of the island moves to the north, causing temperatures in the mid 90s (35 °C) in San Juan and low humidity. The month of June is usually the driest month of the summer. During June and July the precipitation is mostly caused by the effects of humidity and heat of the island.

Autumn is the peak of the hurricane season, especially in September. It is very rainy in the autumn months, with frequent strong thunderstorms on the west coast and a lot of tropical waves and low pressure. This season is hot and humid. On October 9, 1981 temperatures reached 98 °F (37 °C) at San Juan International Airport.

Spring The springtime usually starts dry and pleasant; March is the driest month in Puerto Rico with little precipitation in some parts of the Island. In May the rainy season starts again, with frequent showers and thunderstorms.

All content from Kiddle encyclopedia articles (including the article images and facts) can be freely used under Attribution-ShareAlike license, unless stated otherwise. Cite this article:
Climate of Puerto Rico Facts for Kids. Kiddle Encyclopedia.