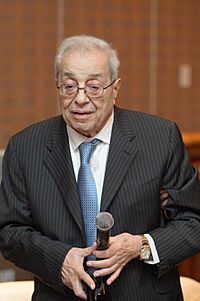 He served as Ambassador of the Arab League to India from 1961 through 1966, to the United Nations from 1979 through 1990 and at the same time to the United States. He worked with presidents John F. Kennedy, Lyndon B. Johnson, Jimmy Carter, Ronald Reagan and George H. W. Bush.

Besides from being an ambassador, Maksoud was the senior editor of Al-Ahram. He also served as professor of International Relations and director of the Center for the Global South at American University in Washington, D.C..

All content from Kiddle encyclopedia articles (including the article images and facts) can be freely used under Attribution-ShareAlike license, unless stated otherwise. Cite this article:
Clovis Maksoud Facts for Kids. Kiddle Encyclopedia.