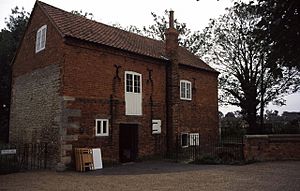 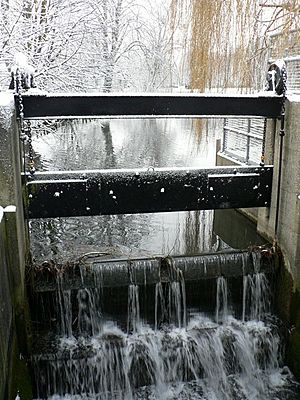 Cogglesford Mill (sometimes referred to as Coggesford) is a Grade II listed working watermill in Sleaford, Lincolnshire. It is possibly the last working Sheriff's Mill in England. The mill sits to the north of Sleaford on banks of River Slea. There is archaeological evidence of a Saxon mill on the site and records in the Domesday book of later mills; the present redbrick structure dates to the late 18th century, with alterations from the 19th Century.

The ford from which the mill takes its name is where the Roman road now called Mareham Lane crossed the Slea. The original crossing, no longer extant, is a few hundred yards downstream of the mill, close to the current footbridge.

There were many other mills along the river at various times. During the construction of the Sleaford Navigation, in the 1790s, locks were provided at each of the mills to maintain the necessary head. After the navigation closed and as the locks fell into repair they were replaced by weirs, and the weir at Cogglesford is particularly elaborate, having to maintain the head of this still working mill.

Cogglesford mill (including the mill race and bridge) was assigned a listed status on 20 July 1973. The mill is open to the public 7 days a week during the summer and Organic stoneground flour is milled there and sold in shop.

All content from Kiddle encyclopedia articles (including the article images and facts) can be freely used under Attribution-ShareAlike license, unless stated otherwise. Cite this article:
Cogglesford Mill Facts for Kids. Kiddle Encyclopedia.