Colin the Caterpillar facts for kids

Colin the Caterpillar is a chocolate sponge roll cake filled with chocolate buttercream and covered in a milk chocolate shell, with sugar-coated milk chocolate beans for decoration. The cake has a decorative face and feet made of white chocolate. The dessert is available in large and small sizes.

According to Marks and Spencer, it takes 38 people to assemble each cake from start to finish, and 8.4 tonnes (8,400 kg) of sugar coating are used each year for the decorative spots.

Initial success for sales of the cake has been attributed to the ongoing popularity of Eric Carle's children's picture book The Very Hungry Caterpillar, and the fact that a bestselling cookbook by Jane Asher, published the same year that the cake launched, also featured a recipe for a caterpillar birthday cake. However, Colin the Caterpillar has since become a staple of children's birthday parties, but is also popular with teens and adults.

Over the years, there have been several seasonal and limited edition variations on the original Colin the Caterpillar cake: 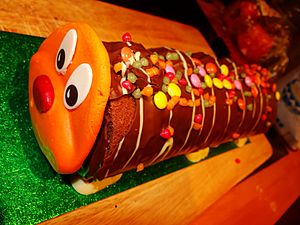 In reaction to the media generated around the court case Papa's Fish and Chips, a fish and chip shop in Cleethorpes, began selling deep-fried Mini Colin the Caterpillars. Profits from the sales were used to raise funds for the Teenage Cancer Trust. Emanuel’s, a fish and chip shop in East Kilbride, later gained media attention for selling a full-sized Colin the Caterpillar Cake that had been deep-fried in batter.

All content from Kiddle encyclopedia articles (including the article images and facts) can be freely used under Attribution-ShareAlike license, unless stated otherwise. Cite this article:
Colin the Caterpillar Facts for Kids. Kiddle Encyclopedia.