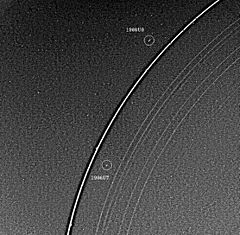 Cordelia it the closest moon to Uranus. It was found from the images taken by Voyager 2 on January 20, 1986, and was given the designation S/1986 U 7. It was not seen again until the Hubble Space Telescope observed it in 1997. Cordelia takes its name from the youngest daughter of Lear in William Shakespeare's King Lear. It is also designated Uranus VI. This moon which is 14 km (9 mi) across is the same size of Deimos, Mars' smallest moon.

Other than its orbit, radius of 21 km and geometric albedo of 0.08, almost nothing is known about it. At the Voyager 2 images Cordelia appears as a stretched object, the major axis pointing towards Uranus.

All content from Kiddle encyclopedia articles (including the article images and facts) can be freely used under Attribution-ShareAlike license, unless stated otherwise. Cite this article:
Cordelia (moon) Facts for Kids. Kiddle Encyclopedia.