The corgi (or Welsh corgi) is a small breed of dog. It comes from Wales.

Corgis have a long torso and short legs, large bones, and a very short tail. Corgis were originally bred as herding dogs. They are very active and like exercise. They are intelligent and have good memories. 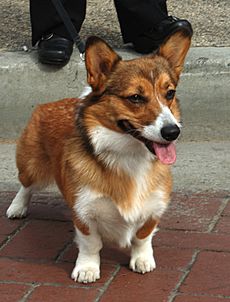 Outside Wales, corgis have been made popular by Queen Elizabeth II. She usually had at least four as pets and once as many as thirteen. Her first corgi was named Susan. She mated Susan and her current dogs are still offspring of that breeding. She now has two corgis who are about twelve years old. Some portraits of Queen Elizabeth II show her holding a corgi or a few around her.

All content from Kiddle encyclopedia articles (including the article images and facts) can be freely used under Attribution-ShareAlike license, unless stated otherwise. Cite this article:
Corgi Facts for Kids. Kiddle Encyclopedia.