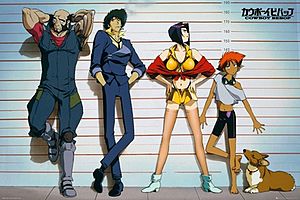 Cowboy Bebop is a Japanese anime television show. It first aired in Japan in 1998. It was created by Sunrise and directed by Shinichiro Watanabe. The show is about a group of bounty hunters who travel in outer space to catch criminals. It has 26 episodes. The series has received a TV-MA rating in the United States.

There is a movie, a manga, and two video games based on the show. The movie is called Cowboy Bebop: Knockin' on Heaven's Door. The video games are for Playstation and Playstation 2. They were never released in the United States.

Cowboy Bebop is inspired by American culture. Jazz music is mostly played in the show. The episodes are called "Sessions."

Cowboy Bebop takes place in the year 2071. The members of the space ship Bebop travel through outer space trying to catch criminals. Bounty hunters are known as "Cowboys". If they catch the criminals alive then they get a reward. If the criminals die, the cowboys get nothing. The criminals are called bounties. Most episodes are about catching a bounty. Some episodes are about the characters' pasts and lives. At the beginning there are two main heroes, Spike and Jet. Later they would meet with others. They had become the crew of the space ship Bebop. Other members of the Bebop are Faye, computer hacker Ed, and a dog named Ein.

All content from Kiddle encyclopedia articles (including the article images and facts) can be freely used under Attribution-ShareAlike license, unless stated otherwise. Cite this article:
Cowboy Bebop Facts for Kids. Kiddle Encyclopedia.