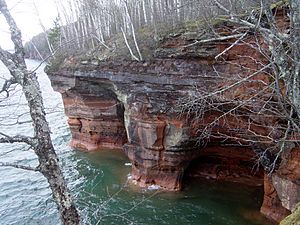 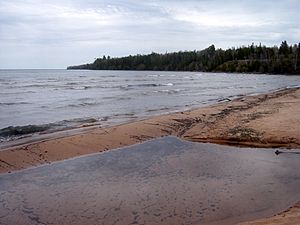 The swimming beach on Lake Superior 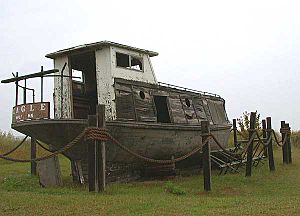 Cornucopia is an unincorporated census-designated place in the town of Bell in northern Bayfield County, Wisconsin, United States. It is situated on Lake Superior at the northern end of the Bayfield Peninsula. It is along Wisconsin Highway 13 and County Highway C. As of the 2010 census, its population was 98. The community borders the lake at Siskiwit Bay, between Roman's Point and Mawikwe (formerly Squaw) Point. It is near a mainland portion of the Apostle Islands National Lakeshore, which features the Mawikwe Bay Sea Caves.

The Ojibwe used the Siskiwit Bay area as a temporary camp and a stopover on the way to La Pointe. "Siskiwit" comes from an Ojibwe word for a subspecies of Lake trout known in English as a "fat trout". A historical marker at the Cornucopia beach tells of the Tragedy of the Siskiwit, an Ojibwe battle on that site with a band of Meskwaki that lead to several deaths and the kidnapping of a chief's son.

The first white settlers in the Siskiwit Bay area were loggers who came at the close of the nineteenth century. Remnants of this period include abandoned railroad pilings in Siskiwit Lake and a legend of stolen gold on Gold Hill at the southeastern edge of the community.

The first farmers were "Russians" who came to the Town of Bell from the Austrian Empire via Chicago. They were not Great Russians but Carpatho-Russians or Rusyns, an ethnic group found in the mountainous borderlands of Poland, Slovakia, Ukraine, and, Romania. Rusyn surnames found in Cornucopia include Kaseno, Celinsky, Sveda, Roman, and Pristash.

In 1903, T.J. Stevenson and Albert Wescott, two land speculators from Iowa established a post office and gave the village the name "Cornucopia" for its abundance of resources. The centennial celebration in 2003 recognized this event.

After World War II, Cornucopia's natural beauty led tourism to replace logging, farming, and fishing as the dominant industry of the community. Today, most working-age residents are engaged in trades, service, or seasonal employment.

The Bell Town Hall, a large brick building in the center of the community, was a school until the 1970s. Today children from Cornucopia attend school in Port Wing, Wisconsin, 15 miles to the west. The town was awarded a grant to remodel the town hall, making it more accessible, building a new kitchen, and replacing windows. It is the site of many weddings and family gatherings and host to community events, such as the annual fish fry. The baseball diamond was the home field of the Cornucopia Little League baseball team.

The Cornucopia Historic (Green Shed) Museum lies on the harbor. It contains displays of photographs, family histories and historic artifacts. 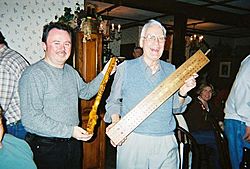 Cornucopia Day takes place every year on the second Saturday in August. The event, put on for the benefit of the volunteer fire department, includes a parade, flea market, and street dance.

The Annual Fish Fry takes place on the Sunday closest to July 4.

The Annual Turkey Feed and Volunteer Firemen's Benefit takes place the first Sunday of the whitetail deer (gun) hunting season, which is typically the Sunday before Thanksgiving.

Cribbage League is a five-week cribbage contest between the residents of Cornucopia and the nearby community of Red Cliff, Wisconsin, taking place every January and February. 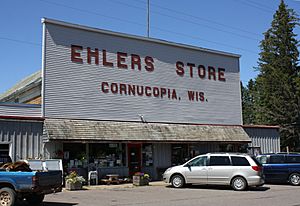 Lumberman Walter Flieth and fisherman Herman Ehlers started the Flieth-Ehlers Mercantile Company in 1915. Now known as Ehlers' General Store, it has been the social and commercial center of the community since its beginnings. The store was operated by Ehlers' son Harold and grandson Mark until its sale in 2006 to Jayne Norton and Max Taubert.

Cornucopia has a harbor where the Siskiwit River meets Lake Superior. Today, two marinas, one private and one municipal, operate out of Cornucopia. There is also an extensive sand swimming beach. Numerous gift shops and lodging places line the harbor.

The community was once home to the Cornucopia Yacht Club, an imaginary yacht club founded by Hale, Roger, and Scot O'Malley in 1975. The O'Malleys founded the club to gain access to yacht club marinas in other cities, which generally required a reciprocal agreement with another club. While the club printed membership cards and made its own jackets, it never had its own marina or building; its mailing address was "Pier 99", which was actually a post office box at Cornucopia's post office. Membership cost $5 a year, and members were not required to own a boat; the application instead asked what members would name their boats if they had one. The club once boasted over 700 members, including several who had never been to Cornucopia; according to the founders, this tally included former U.S. President Gerald Ford and his wife Betty.

All content from Kiddle encyclopedia articles (including the article images and facts) can be freely used under Attribution-ShareAlike license, unless stated otherwise. Cite this article:
Cornucopia, Wisconsin Facts for Kids. Kiddle Encyclopedia.