Cottage Grove post office was established in 1855 east of present-day Creswell. The office was named by its first postmaster, G. C. Pearce, whose home was in an oak grove. In 1861, the office was moved to the present site of Saginaw. In the late 1860s, the office was moved to what is now the extreme southwestern part of present-day Cottage Grove, on the west bank of the Coast Fork Willamette River. When the Southern Pacific railroad was built through the area in the 1870s, Cottage Grove station was placed more than half a mile northeast of the post office, on the east side of the river. This was the start of a neighborhood dispute that lasted for nearly 20 years. The people living near the post office did not want it moved to the railroad station, so a new office was established at the station with the name Lemati, which is a Chinook Jargon word that means "mountain". Lemati office ran from November 1893 to September 1894, but in March 1898 the Cottage Grove office was renamed Lemati and it ran that way until being permanently renamed Cottage Grove in May 1898.

The city was incorporated in 1887, but the people living on the east side rebelled in 1893 and founded East Cottage Grove. The Oregon State Legislature changed the name of the place to Lemati in 1895, and the signboard for the station listed Cottage Grove, as well as Lemati in smaller letters. In 1899 an act was passed that consolidated the two towns under the name Cottage Grove.

The only existing covered railroad bridge west of the Mississippi River, the National Register of Historic Places-listed Chambers Railroad Bridge, is in Cottage Grove. The City of Cottage Grove restored the bridge in 2011, reopening it on December 3.

Cottage Grove lies south of the confluence of the Row River and the Coast Fork Willamette River. This confluence effectively marks the southern end of the Willamette Valley.

This region experiences warm (but not hot) and dry summers, with no average monthly temperatures above 71.6 °F (22.0 °C). According to the Köppen Climate Classification system, Cottage Grove has a warm-summer Mediterranean climate, abbreviated "Csb" on climate maps.

There were 3,895 households of which 32.2% had children under the age of 18 living with them, 43.8% were married couples living together, 14.8% had a female householder with no husband present, 4.9% had a male householder with no wife present, and 36.6% were non-families. 29.9% of all households were made up of individuals and 14.1% had someone living alone who was 65 years of age or older. The average household size was 2.47 and the average family size was 3.02. 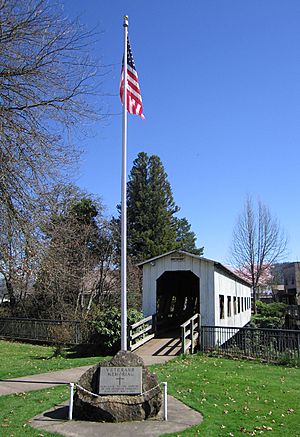 Two of the largest festivals in Cottage Grove are Bohemia Mining Days and the Covered Bridge Festival.

Cottage Grove is known as the "Covered Bridge Capital of Oregon" with six covered bridges near the city. Five of the six bridges, Chambers Covered Bridge, Currin Bridge, Dorena Bridge, Mosby Creek Bridge, and Stewart Bridge, are listed on the National Register of Historic Places. Centennial Covered Bridge is a replica bridge constructed from materials salvaged from dismantled bridges. The Swinging Bridge is a historic suspension footbridge.

The city is also home to 21 murals located throughout downtown that reflect the history of the community. The Cottage Theatre is located in the city. 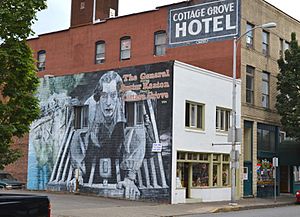 Several films have been filmed in Cottage Grove. In 1926, Buster Keaton's The General was filmed in Cottage Grove and the surrounding countryside. The movie included a spectacular locomotive crash, and the wrecked train became a minor tourist attraction until it was dismantled for scrap during World War II. The 1973 movie Emperor of the North Pole was filmed in and around Cottage Grove, as were parts of the 1978 movie Animal House. The 25th anniversary of Animal House's release was celebrated by the citizens with a toga party on August 30, 2003, on Main Street. Main Street is where the climactic parade sequence from the movie was filmed. Portions of the movie Stand By Me were filmed along the railroad tracks east of Cottage Grove, which are now the Row River National Recreation Trail, a bicycle and walking trail. Ricochet River, starring Kate Hudson, was filmed in Cottage Grove in 1997.

Dorena Lake and Cottage Grove Lake are near the city. There is also a system of cycle trails at Mosby Creek.

All content from Kiddle encyclopedia articles (including the article images and facts) can be freely used under Attribution-ShareAlike license, unless stated otherwise. Cite this article:
Cottage Grove, Oregon Facts for Kids. Kiddle Encyclopedia.