Cracow is a gold mining town and locality in Queensland, Australia, in the Banana Shire local government area. The town is located on the Theodore – Eidsvold road, 485 kilometres (301 mi) north west of the state capital, Brisbane. At the 2011 census, Cracow and the surrounding area had a population of 196. 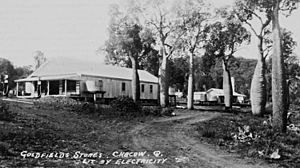 The town was named for a pastoral run, named in 1851 by pastoralist, John Ross, for the Polish city of Kraków which had made a brave stand for independence.

Gold was first discovered in Cracow in 1875 by itinerant fossickers and a further discovery of a nugget was made by an Aboriginal man in 1916. In 1931, the Golden Plateau mine was established and it operated continuously until 1976.

At its gold mining peak, the town included five cafes, barber shop, billiard saloon, two butchers, a picture theatre and a soft drink factory. The closure of the mine led to Cracow becoming a ghost town with many deserted houses and shops.

In 2004, Newcrest Mining reestablished gold mining in the town, leading to hopes the town may recover. 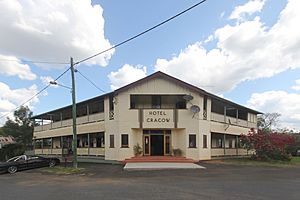 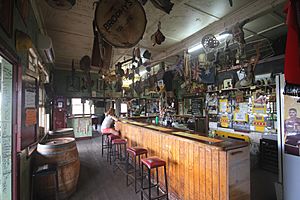 The local hotel is one of the only remaining retail business, as it attracts a lot of tourists due to its unusual array of strange artifacts adorning the ceilings and walls. The other business was the General Store, which doubled as a post office and video store. 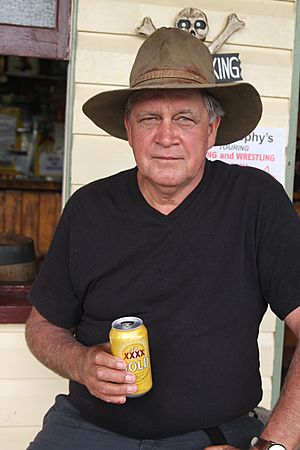 All content from Kiddle encyclopedia articles (including the article images and facts) can be freely used under Attribution-ShareAlike license, unless stated otherwise. Cite this article:
Cracow, Queensland Facts for Kids. Kiddle Encyclopedia.