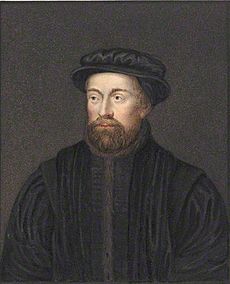 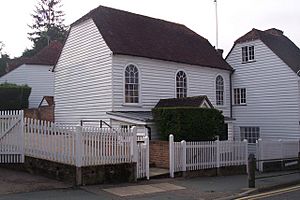 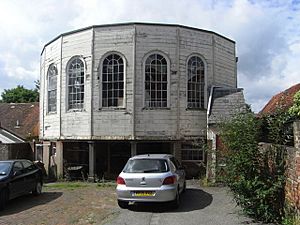 Cranbrook is a small town in the civil parish of Cranbrook and Sissinghurst, in the Weald of Kent in South East England. It lies roughly half-way between Maidstone and Hastings, about 38 miles (61 km) southeast of central London.

The smaller settlements of Sissinghurst, Swattenden, Colliers Green and Hartley lie within the civil parish. The population of the parish was 6,717 in 2011.

The place name Cranbrook derives from Old English cran broc, meaning Crane Marsh, marshy ground frequented by cranes (although more probably herons). Spelling of the place name has evolved over the centuries from Cranebroca (c. 1100); by 1226 it was recorded as Cranebroc, then Cranebrok. By 1610 the name had become Cranbrooke, which evolved into the current spelling.

Edward III brought over Flemish weavers to develop the Wealden cloth industry using wool from Romney Marsh; Cranbrook became the centre of this as it had local supplies of fuller's earth and plenty of streams that could be dammed to drive the fulling mills. Iron-making was carried on at Bedgebury on the River Teise, an industry which dates back to Roman times. The tributaries of the River Beult around Cranbrook powered 17 watermills at one time. In 1290 the town received a charter from Archbishop Peckham, allowing it to hold a market in the High Street.

Baker's Cross on the eastern edge of the town is linked to John Baker, Chancellor of the Exchequer under Queen Mary, a Catholic. Legend holds that he was riding on his way to Cranbrook in order to have two local Protestants executed, when he turned back after the news reached him that Queen Mary was dead. Different versions of the legend have it that he heard the parish church bells ringing, or that he was met by a messenger. The place where this happened was, in the words of biographer and historian Arthur Irwin Dasent, "at a place where three roads meet, known to this day as Baker's Cross". Popular legend also has it that Baker was killed at Baker's Cross; although in fact he died in his house in London.

Located on the Maidstone to Hastings road, it is five miles north of Hawkhurst. The smaller settlements of Swattenden, Colliers Green and Hartley lie within the parish. Baker's Cross is on the eastern outskirts of the town.

Cranbrook is on the Hastings Beds, alternating sands and clays which are more resistant to erosion than the surrounding clays and so form the hills of the High Weald. The geology of the area has played a major role in the town's development, deposits of iron ore and fuller's earth were important in the iron industry and cloth industry respectively.

At the 2011 census, Cranbrook had 6,717 residents. The Kent Structure Plan calls it the smallest town in Kent, although Fordwich has a town council and just 381 residents.

During the 19th century, a group of artists known as the "Cranbrook Colony" were located here. The Colony artists tended to paint scenes of domestic life in rural Kent – cooking and washing, children playing, and other family activities.

Queen's Hall Theatre, part of Cranbrook School, sponsors many theatre groups, including the Cambridge Footlights and Cranbrook Opera and Dramatic Society (CODS). The Showtimers pantomime group produces an annual show. Cranbrook Town Band, founded in the 1920s, is a British-style brass band, which performs regular concerts in the Queen's Hall, St Dunstan's Church and around Kent.

There have been many plans to create a community hub, starting with a proposal to convert the old council offices. The focus then switched to a £2m building planned on Wilkes Field, next to the Co-op carpark. As of 2013[update] plans included small community rooms and three large day rooms which could convert into a hall for 300 people, along with a day care centre, council offices, public toilets and even the police station. In April 2016 residents voted against the parish council taking out the £2m loan required for the project, but in September 2016 the Borough Council approved a £20m regeneration plan that would create shops, flats and a community centre.

There are many medieval buildings in the area. At Wilsley Green, to the north of the town, is a Grade I-listed Wealden hall house and cloth hall that dates to the late 14th century. There are a number of medieval cloth halls around the town - the George Hotel is in one dating to 1400, there are two more further down the High St on the north side dating from the late 15th century and 16th century. There are 15th century examples at Goddards Green Farm on Angley Rd, Hill House on The Hill, and on Friezley Lane.

Glassenbury Park is a late-15th-century manor house on the road to Iden Green with a 1730s front block, remodelled in 1877-79 by Anthony Salvia. Wilsley Hotel was originally built in 1864-70 as a home for the Colony artist John Callcott Horsley, designer of the first Christmas card twenty years earlier. The architect was Richard Norman Shaw in his first important domestic commission. The war memorial was erected on Angley Road in 1920. 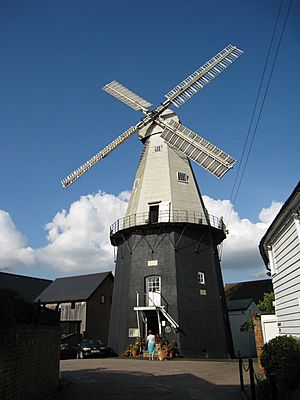 Over the years there have been four windmills in and around Cranbrook of which only the Union Mill survives and dominates the local skyline. It was built in 1814 for Henry Dobell, who went bankrupt five years later. Then the mill was run by a union of creditors until 1832. The Russell family ran it for the next 128 years, when it was sold to Kent County Council, who have restored it. The mill is kept in working order to this day. It stands ¼ mile (400 m) southeast of the church.

Cranbrook Common smock mill had common sails and was winded by hand. It was marked on the Ordnance Survey map covering the area which was published between 1858 and 1872. The mill was last worked in 1876 and was demolished on 9 August 1902. The mill stood 1¾ miles (2.8 km) north north east of the church.

Windmill Hill is thought to have been a smock mill that was moved to Sissinghurst c. 1814. It stood ¼ mile (400 m) west north west of the church. This mill was marked on Emanuel Bowen's map of Kent (1736) and also on Andrews, Drury and Herbert's map of Kent, 1769. The latter also shows a mill at Saint's Hill, 1 mile 5 furlongs (2.6 km) north east of the church.

The junction of the A262 (Lamberhurst – Biddenden) and the A229 (Rochester – Hawkhurst) pass near Cranbrook. Cranbrook is served by Arriva Southern Counties buses.

The Hawkhurst Branch Line ran a short distance from the town, but Cranbrook railway station, which was 2 miles (3.2 km) southwest of the centre, stopped operations on 12 June 1961. The nearest operating station is at Staplehurst.

St Dunstan's church is known as the "Cathedral of the Weald"; its 74 feet-high tower, completed in 1425, has a wooden figure of Father Time and his scythe on the south face. It also contains the prototype for the Big Ben clock in London. Work started in the late 13th century, the chancel arch and porch are a century later, the nave and tower were added after 1500, and Slater and Christian restored the building in 1863. It is administered by the Weald Deanery, part of the Archdeaconry of Maidstone which is in turn one of three archdeaconries in the Diocese of Canterbury.

Cranbrook Strict Baptist Chapel was built in 1787 and is the only survivor of two Strict Baptist chapels within a short distance in the village centre; Providence Chapel is now closed. Cranbrook Congregational Church was built in Neo-Gothic style in 1857, replacing an earlier chapel. It remains Congregational, having stayed outside the United Reformed Church denomination. The Catholic St Theodore's Church opened in 1958.

All content from Kiddle encyclopedia articles (including the article images and facts) can be freely used under Attribution-ShareAlike license, unless stated otherwise. Cite this article:
Cranbrook, Kent Facts for Kids. Kiddle Encyclopedia.