Croghan is a town in Lewis County, New York, United States. The population was 3,093 at the 2010 census.

The Town of Croghan is in the northern part of the county and located northeast of the county seat, Lowville. The town contains a village also named Croghan, a small part of which is located in the town of New Bremen. Both the village and town are locally pronounced \Krō-gun\ (with a hard g and silent h, emphasis on the first syllable).

The southwest part of the town was the locale of an ill-fated colony of refugees from the French Revolution. The settlements were disbanded by 1814. Modern settlement began around 1830.

The town was formed in 1848 from the Towns of Watson and Diana. In 1848, part of the town was used to help form New Bremen.

Theodore B. Basselin played a large part in Croghan’s history. Mr. Basselin came to America and settled in Croghan where he became the town’s first millionaire due to his successful logging business. He was one of the town’s top employers in his day. The beautiful Basselin mansion still stands in downtown Croghan. Mr. Basselin is responsible for a few other landmarks in the town. The Croghan Library that was once the Basselin Opera House stands down the road from the Basselin Mansion. Also next to the library is the Basselin Cemetery. The American Maple Museum, which is located next to St. Stephen’s church, was originally the Father Leo Memorial School. The school was built from the funds of the Basselin estate.

The Croghan Island Mill was listed on the National Register of Historic Places in 2010. 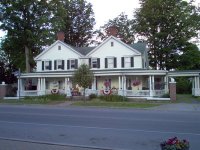 The second great Croghan fire occurred on May 1, 1912. The fire caused considerable damage to the downtown business district of the village. Thirty-Two buildings were destroyed by the flames with the total damage estimated to have been about $600,000. Two children, who lived in the building where the fire started, lost their lives. The fire was so large that assistance had to be provided by the Lowville Fire Department, who sent a train into town with supplies and men.

The fire had its origin in a back yard bonfire which accidentally made its way into the Grounert Café building where two children of the family were trapped in the smoke filled building. The children were eventually rescued from the blaze but both died almost immediately afterwards.

The firefighters who were excited by the rescue, underestimated the danger of the fire to spread to nearby structures. Most of the buildings at the time were wooden structures which allowed the fire to spread quickly from building to building. The spreading happened so quickly that firefighters were driven from the hydrants so quickly that they, at times did not have time to shut them off. This weakened the water pressure significantly which later handicapped the effort to stop the blaze.

The fire had crossed the street setting both sides ablaze. Thirty-two buildings were destroyed, including the post office, a general store, Peter Shinbourne’s Shoe factory, William Ritz’s Café, Raymond Lee’s five and ten cent store, Norman Martin’s hotel and many people’s homes. On the other side of the street, Monett’s store, many more homes, the Town Hall, Honsicker’s Meat Market, S.E. Simon’s Drug Store, and Marilley’s General Store were also destroyed. Marilley’s Store alone lost an estimated $50,000 in damages. The Town Hall and Opera House both of which had been recently remodeled a large expense.

The local fire department realized that they needed assistance and made a call for help to Lowville. A train was sent with a chemical engine, 1,500 feet of hose and a company of fifteen firemen. Much of the hose was lost because it could not be disconnected from the hydrants in time. The Farney & Steiner and Virkler feed and grist mills were destroyed along with much value machinery, one of the mill owners lost about $200,000.

The fire was eventually stopped after firefighters concentrated their efforts. The fire ended just short of St. Stephen's Roman Catholic Church. The Franciscan monastery with the large school building connected with it was also saved. On the opposite side of the street the blaze stopped at the Basselin Mansion, both of which still stand there today.

The Black River defines the west town line. The Indian River flows out from the northwest part of the town. The Beaver River flows through the south part of Croghan.

There were 1,115 households out of which 37.9% had children under the age of 18 living with them, 64.0% were married couples living together, 7.3% had a female householder with no husband present, and 23.3% were non-families. 18.7% of all households were made up of individuals and 9.7% had someone living alone who was 65 years of age or older. The average household size was 2.83 and the average family size was 3.25.

Communities and locations in the Town of Croghan

All content from Kiddle encyclopedia articles (including the article images and facts) can be freely used under Attribution-ShareAlike license, unless stated otherwise. Cite this article:
Croghan (town), New York Facts for Kids. Kiddle Encyclopedia.