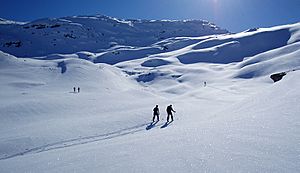 Cross-country skiing (also known as XC skiing) is a winter sport popular in many countries with large snowfields, primarily Northern Europe and Canada. The popularity of the sport has been quickly growing in the United States.

A hobby and a sport 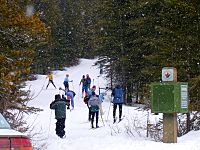 As a hobby, cross-country skiing may be viewed as a kind of "bushwalking on skis", where skiers tackle trails of various lengths and difficulties. Some skiers stay out for extended periods using tents and equipment similar to bushwalkers/hikers, whereas others take relatively short trips from ski resorts on maintained trails.

As a sport, cross-country skiing is one of the most difficult endurance sports, as its motions use every major muscle group and it (along with rowing and swimming) is one of the sports that burn the most calories per hour in execution. 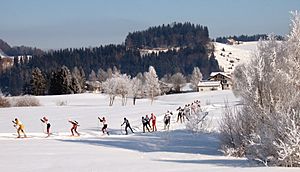 The Winter Olympics, the FIS Nordic World Ski Championships, and the FIS World Cup events (including the Holmenkollen) have long been a showcase for the world's fastest cross country skiers.

Cross-country skiing originated in Fennoscandian countries in prehistoric times. It was still widely practiced in 19th century as a way of moving from place to place in winter. Elk, deer and other animals were hunted by skiing. Nowadays almost everyone in Finland and Norway have and regularly use skis.

Traditionally, all of the equipment was made of natural materials: wooden skis and bamboo poles with leather hand straps. Footwear was usually sturdy leather boots with thick soles.

All content from Kiddle encyclopedia articles (including the article images and facts) can be freely used under Attribution-ShareAlike license, unless stated otherwise. Cite this article:
Cross-country skiing Facts for Kids. Kiddle Encyclopedia.