Cuisine of Brisbane facts for kids 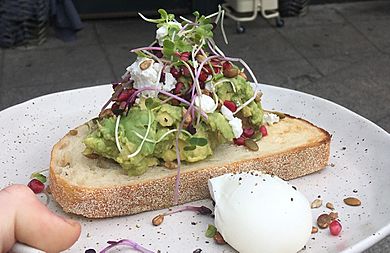 An icon of Brisbane cuisine, "Smashed avo". Although popularized in Sydney in the 1990s, smashed avo' originated in Brisbane and Queensland with a history dating back to before the 1920s.

The cuisine of Brisbane derives from mainstream Australian cuisine, as well as many cuisines of international origin, with major influences from Asian cuisine, European cuisine and American cuisine that reflect the city's ethnic diversity, though Brisbane is represented by a wide range of other ethnic cuisines.

Brisbane's culinary scene is often described as more casual with an emphasis on outdoor dining. Café culture is prominent with Australian-style brunch particularly common. Roof-top bars are also an iconic establishment of the city, and as well as its Street food scene with Food trucks and pop-up bars common. 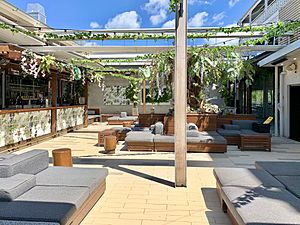 Brisbane dining is often defined by its outdoors and casual nature

Brisbane is home to over 6,000 restaurants and dining establishments, with outdoor dining featuring prominently. Moreton Bay bugs, less commonly known as flathead lobsters, are an ingredient named for the Brisbane region and which feature commonly in the city's cuisine. 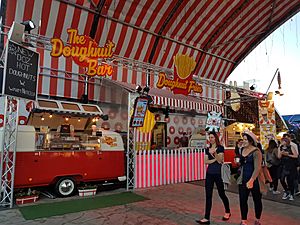 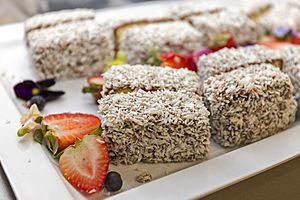 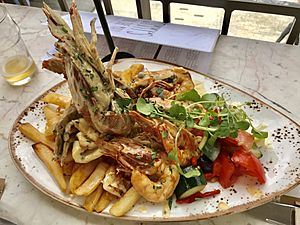 Dishes invented or claimed by Brisbane 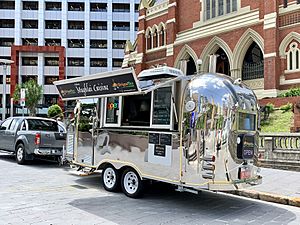 All content from Kiddle encyclopedia articles (including the article images and facts) can be freely used under Attribution-ShareAlike license, unless stated otherwise. Cite this article:
Cuisine of Brisbane Facts for Kids. Kiddle Encyclopedia.