The culture of Ann Arbor, Michigan includes various attractions and events, many of which are connected with the University of Michigan.

Throughout the 1960s, 1970s, 1980s, 1990s, and today Ann Arbor was home to many influential rock bands, such as the MC5, Alice Cooper, Iggy Pop, Brownsville Station, George Clinton (but not really), Bob Seger and the Silver Bullet Band, Mitch Ryder, and The Rationals.

In 1969, avant-garde jazz bandleader Sun Ra (also not from Ann Arbor) and his Arkestra spent about a month living in an Ann Arbor fraternity house, with poet-impresario John Sinclair and his radical White Panther Party for next-door neighbors.

Madonna was a dance major at the University of Michigan in the late 1970s. In 1982 and then again in 1984, the Ann Arbor Music Project (AAMP) released live albums of local music: Cruisin' Ann Arbor, Vol. I: Live at Joe's and Cruisin' Ann Arbor, Vol II: Live at the U Club. At the turn of the 21st century, Ann Arbor has been home to Ghostly International, a globally known record label specializing in electronic music and hosting acts like Matthew Dear and Dabrye.

Other popular groups which originated in Ann Arbor, were frequent visitors of Ann Arbor, or settled in the city or surrounding area include The Stooges, SRC, and The Up. This trend continued with later groups such as The Cult Heroes and I Am Dynamite, although the residual influences of the 1960s trendsetters are still evident in the city today.

See also: Museums at the University of Michigan

Many performing arts groups and facilities are located on the University of Michigan campus, including Hill Auditorium, the Lydia Mendelssohn Theater, and the Power Center for the Performing Arts.

The University Musical Society (UMS) presents approximately 60 to 75 performances and over 100 free educational activities each season. One of the oldest performing arts presenters in the country, UMS is affiliated with the University of Michigan and housed on the UM campus. However, UMS is a separate not-for-profit organization that supports itself from ticket sales, grants, contributions, and endowment income.

The University of Michigan Gilbert and Sullivan Society, affiliated with the University's School of Music, Theatre, and Dance, has put on two fully staged performances of a Gilbert and Sullivan Savoy opera every year since 1947, once in fall semester and the other in winter semester. The society is student-run. Performances take place at the Lydia Mendelssohn Theater.

Ann Arbor has a number of performing-arts institutions that are not affiliated with the University of Michigan. They include the Ann Arbor Civic Theatre (a nonprofit community theater group), Ann Arbor Ballet Theater, Ann Arbor Civic Ballet (the first chartered ballet company in Michigan when it was founded in 1954), Ann Arbor Symphony Orchestra, and Arbor Opera Theater.

Theaters in the city include:

Ann Arbor also has a number of concert halls and nightclubs serving up jazz and other live music:

There are several religious sites in Ann Arbor, including:

The Ann Arbor Hands-On Museum, located in a renovated and expanded historic downtown fire station, contains more than 250 interactive exhibits featuring science and technology. Artrain, located on North Main Street, is a traveling art museum located on a train. A number of other art galleries exist in the city, notably in the downtown area and around the University of Michigan campus. Several buildings throughout the downtown area, like Sweetwaters Coffee and Tea and The Ark, showcase pieces of independent installation art in the form of small "fairy doors". Maps of their locations can be found at Sweetwaters, Peaceable Kingdom, or the Chamber of Commerce. 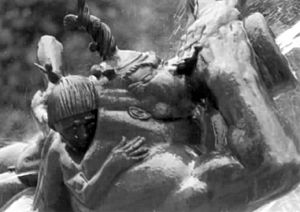 Among U.S. cities, Ann Arbor ranks first in the number of antiquarian booksellers and books sold per capita (although the per capita calculations may not include the large student population). The Ann Arbor District Library maintains four branch outlets in addition to its main downtown building, with a fifth branch set to open in 2008. The city is also home to the Gerald R. Ford Presidential Library.

Ann Arbor is also known within the performance poetry scene. The Neutral Zone, a local teen center, is home to the Volume Youth Poetry Project which holds a competition every year to send a team of six youth poets to the national youth competition Brave New Voices. The city hosted this competition in 2001 and 2002, and has sent a team each year across the U.S.

All content from Kiddle encyclopedia articles (including the article images and facts) can be freely used under Attribution-ShareAlike license, unless stated otherwise. Cite this article:
Culture of Ann Arbor, Michigan Facts for Kids. Kiddle Encyclopedia.