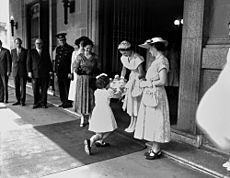 Presenting flowers to The Queen outside Brisbane City Hall, 1954. This is a 'bob' curtsey as used by young girls, and by maids in grand houses. 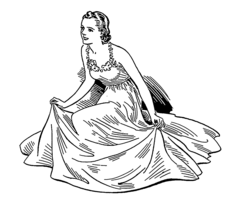 Full curtsey or obeisance, suitable when presented to a monarch on a formal occasion. Notice the back is straight, and the head is not bowed. Rarely seen in modern times

A variation, a kind of mixture of a curtsey and a bow

A curtsey (also spelled curtsy or courtesy) is a traditional gesture of greeting, in which a girl or woman lowers her body by bending her knees. It is the female equivalent of male bowing in European cultures. The word "curtsy" comes from "courtesy" which means "politeness".

According to Desmond Morris, the movements in the curtsey and the bow were similar until the 17th century. Only later did the difference between the female and the male gesture develop. The earlier, combined version is still performed by Restoration comedy actors.

When a curtsey is very formal, the girl/woman bends the knees outward (rather than straight ahead), often sweeping one foot behind her. She may also use her hands to hold her skirt out from her body. In Victorian times, when women wore floor-length, hooped skirts, they curtsied using the plié movement borrowed from second-position in classical ballet in which the knees are bent while the back is held straight. Both feet and knees point out so the body lowers straight down. In this way, the lady lowers herself evenly, not to one side.

Traditionally, women and girls curtsey to people who are of higher rank (more important) than they are, just as men and boys bow. Today this practice has become less common. In European cultures it is traditional for women to curtsey in front of members of the Royal family. This is sometimes called a "court curtsey" and is often very deep. Some female domestic workers curtsey for their employers.

Female dancers often curtsey at the end of a performance to show thanks or acknowledge applause from the audience. At the end of a ballet class, students will also curtsey or bow to the teacher and the pianist to thank them. According to Victorian dance etiquette, a woman curtseys before beginning a dance. Female Scottish highland dancers performing the national dances and the Irish jig also curtsey as well (at both the beginning and end for the national dances and at the end for the Irish Jig). Some female ballroom dancers will curtsey to their partners before beginning the Viennese Waltz. In some cultures females bow instead of curtseying.

All content from Kiddle encyclopedia articles (including the article images and facts) can be freely used under Attribution-ShareAlike license, unless stated otherwise. Cite this article:
Curtsey Facts for Kids. Kiddle Encyclopedia.