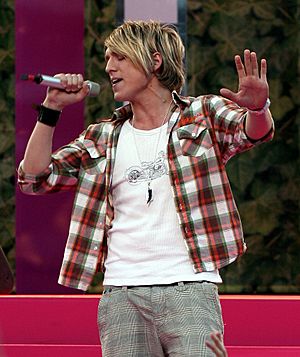 Danny Saucedo (born Daniel Gabriel Alessandro Saucedo Grzechowski on 25 February 1986 in Stockholm, Stockholms Län, Sweden) is a Swedish singer who competed as one of the finalists in Pop Idol — the Swedish version of Idol. His two songs charted on the official Swedish singles chart. '"Öppna Din Dörr"' (Tommy Nilsson cover) peaked at No. 24 in 2006 and Tokyo (credit to Danny) was two weeks at No. 1 in 2007.

All content from Kiddle encyclopedia articles (including the article images and facts) can be freely used under Attribution-ShareAlike license, unless stated otherwise. Cite this article:
Danny Saucedo Facts for Kids. Kiddle Encyclopedia.