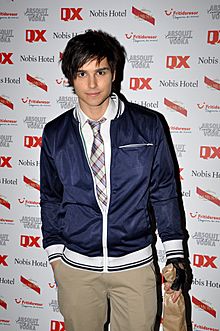 Eric Saade (born 29 October 1990 in Helsingborg, Sweden) is a Swedish singer. He spent two years with as boy band called What's Up!. He left the band in February 2009 to for a solo career. He won the Swedish Melodifestivalen 2011 with the song "Popular". He represented Sweden at the Eurovision Song Contest 2011 in Germany, placing third in the final.

Saade is of Palestinian descent on his father's side.

All content from Kiddle encyclopedia articles (including the article images and facts) can be freely used under Attribution-ShareAlike license, unless stated otherwise. Cite this article:
Eric Saade Facts for Kids. Kiddle Encyclopedia.