Robin James Olof Stjernberg (Swedish pronunciation: [ˈrɔ̌bːɪn ˈɧæ̂ːɳbærj]; born 22 February 1991, Hässleholm, Sweden) is a Swedish pop singer, songwriter and producer. He represented Sweden in the Eurovision Song Contest 2013 on home soil on 18 May 2013 with the song "You". Stjernberg started his career in the boyband What's Up!, and became a contestant in Idol 2011, placing as first runner up in the final. He participated in Eurovision Song Contest 2017 as the songwriter for the song "I Can't Go On" performed by Robin Bengtsson, which ended up in fifth place.

In band What's Up!

Stjernberg had won in the Sommarchansen in Malmö in 2006. In 2007, he took part in an event held at the Globe Theater where 15 finalists vied to become part of a prospective boy band. He was one of four chosen to become part of the band, eventually called What's Up!. The other finalists that made part of the band were Eric Saade, Luwdig "Ludde" Keijser and Johan Yngvesson. When Eric Saade left, he was replaced by Johannes Magnusson. The band released one album, In Pose reaching number 40 on the Swedish Albums Chart. Two of the singles charted in the Sverigetopplistan, the official Swedish Singles Chart, namely "Go Girl!" reaching number 5 and "If I Told You Once" that peaked at number 16. Stjernberg became the second member of What's Up! to represent Sweden at Eurovision after Eric Saade represented the country in the Eurovision Song Contest 2011 in Germany.

Stjernberg took part in Idol 2011 and finished in second place.

He received 48% of the votes against 52% to the winner Amanda Fondell in the final. 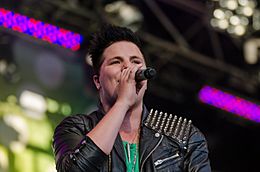 After Idol, he released his first music single "All This Way" on 2 December 2011. The song, also sung by the winner Amanda Fondell in a separate version, is written and produced by Idol 2004 first runner up Darin Zanyar amongst others. Stjernberg is signed to the Lionheart Music Group record label.

He released his own Idol-compilation My Versions on 4 January 2012. The first official single from the album will be his version of Beyoncé's song "Halo".

Stjernberg took part in Melodifestivalen 2013 with the song "You". He performed in the fourth semi-final held on 23 February 2013 in Malmö Arena, Malmö and coming 3rd/4th, qualified to the "Second Chance" round, which was held on 2 March in Löfbergs Lila Arena, Karlstad. In the "Second Chance" round, he was in the best four songs after the first two rounds of voting, and he won his duel against Martin Rolinski. He went on to win the final on 9 March. He represented Sweden in the Eurovision Song Contest 2013 in Malmö on 18 May, placing 14th with 62 points. Robin Stjernberg's song became the first "Second Chance" song ever to win the Melodifestivalen final.

On 11 June 2014 Robin released his single named Body language. This single reached no1 in the Swedish iTunes chart.

On 23 October 2015 Robin also released a single "Locked into You" after over a year of silence for Robin. His last release was 'Take Me Home' which was released on 7 January 2016, which peaked at number 5 in the Swedish iTunes chart.

He co-wrote Robin Bengtsson's song for Melodifestivalen 2017, "I Can't Go On". The song went on to win, meaning Stjernberg participated in the Eurovision Song Contest 2017 as a songwriter, ending up in fifth place.

In 2020 Robin became one half of OhFrank and released several singles. On the first of 2021 Robin released his comeback single Pretty.

Robin Stjernberg competed as a songwriter and producer in the Eurovision Song Contest 2017 for the Swedish entry "I Can't Go On", which was performed by Robin Bengtsson and landed in fifth place in the final. Since then, Robin has written and produced a number of songs for both other artists as well as himself, and also collaborated with award-winning songwriters such as Liz Rose, Matt McGinn, Gordie Sampson and Burt Butler. In 2019 and 2020, Robin spent a lot of time in both Stockholm and Nashville, aiming to develop his own artistry. Robin has written and produced music for artists such as Sandro Cavazza, Dotter, Estraden, Megan Thee Stallion, Anna Bergendahl, Jill Johnson and Steps. Robin also took part in writing The Mamas's entry in Melodifestivalen 2021, "In The Middle", which placed third in the final. In 2020 he took part in writing the hit song Lean on Me, which placed #1 on Swedish charts and airplay.

Robin Stjernberg and Benjamin Roustaing started their group project ohFrank during 2020. Together they have released the EP "Dandelion" and the singles "Millenial", "Schizophrenic" and "Venice", to mention a few.

Participation as a songwriter and producer for other artists/groups (2017-)

All content from Kiddle encyclopedia articles (including the article images and facts) can be freely used under Attribution-ShareAlike license, unless stated otherwise. Cite this article:
Robin Stjernberg Facts for Kids. Kiddle Encyclopedia.