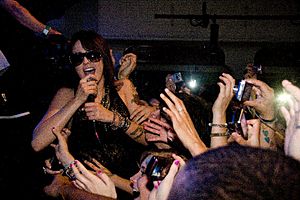 Devin Star Tailes (born July 2, 1989), best known by her stage name Dev, is an American singer. Her associated acts include Far East Movement. Her song "Booty Bounce" was sampled in the Far East Movement's "Like a G6". Her most successful single was "In the Dark".

Dev was born in Tracy, California. She later moved herself to Los Angeles.

All content from Kiddle encyclopedia articles (including the article images and facts) can be freely used under Attribution-ShareAlike license, unless stated otherwise. Cite this article:
Dev (singer) Facts for Kids. Kiddle Encyclopedia.