Dardanelle is a city in Yell County, Arkansas, United States. The population was 4,745 at the 2010 census. Along with Danville, it serves as a county seat for Yell County. It is located near Lake Dardanelle.

Dardanelle is part of the Russellville Micropolitan Statistical Area. 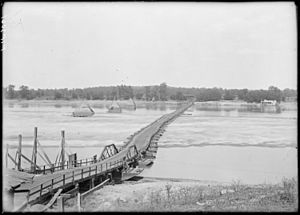 The former (1891-1929) pontoon bridge between Dardanelle and Russellville was the longest in the U.S. at over 2,200 feet

Dardanelle is one of the oldest cities in the state of Arkansas. Officially incorporated in 1855, Dardanelle celebrated its 150th anniversary in 2005. However, the area had been settled for years before that, first being established as a river town in the mid-18th century. It is Yell County's dual county seat, sharing that title with Danville.

The Treaty of Council Oaks was signed on June 24, 1823 on what is now Front Street beneath two huge oak trees (102 feet high and 400–500 years old). Under orders of President James Monroe, U.S. Army Colonel David Brearly and Arkansas territorial secretary Robert Crittendon met with Chief Black Fox and several Cherokee leaders to determine boundaries. As a result of the treaty, the Cherokees gave up all of their land in Arkansas south of the Arkansas River. One of the trees was destroyed in the early 1990s in a flood, but the other is still standing. The site is now a city park.

Because of its location on the banks of the Arkansas River, Dardanelle was one of Arkansas's leading towns in the 19th century. Hundreds of barges, steamboats, and other vessels traveled by the town annually. Approximately halfway between the state's two largest cities of Little Rock and Fort Smith, Dardanelle was a transportation and business hub, known as a marketplace for gin, rum and cotton.

Dardanelle has a history of being one of the state's leading immigration centers that continues to this day. Vast numbers of Czech and German families, including the Ballouns, Vodrazkas, Staneks, and Pfeiffers, came to the town in the late 18th and early 19th centuries, and their impact can still be felt. As of 2010, Dardanelle has one of the highest percentages of Hispanics in the state, with over 36% of the town's population Hispanic (up from 21% in 2000).

Merritt Park opened in the late 1990s on the west side of town. It is a large, state-of-the-art park featuring outstanding baseball facilities, a playground, soccer fields, basketball courts, and a walking/jogging trail. The adjacent Dardanelle Community Center opened around the same time, and provides multiple services for the community.

In the late 19th century, a pontoon bridge between Dardanelle and Russellville replaced ferry service. Spanning 2,208 feet, it was the longest pontoon bridge ever constructed across a moving body of water. The bridge was completely washed out multiple times during its nearly forty years of existence.

The Dardanelle Lock & Dam, constructed in the 1960s as a part of the McClellan-Kerr Navigation System, led to the formation of Lake Dardanelle. It is a source of hydropower, and helps regulate river traffic on the Arkansas River. For 2013, over 8.9 million dollars were budgeted for its operations. 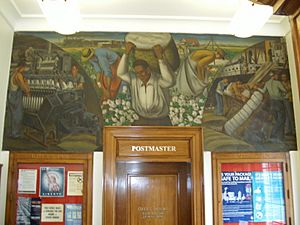 An oil on canvas mural, Cotton Growing, Manufacture, and Export, painted in 1939 by Ludwig Mactarian is on display in the Dardanelle post office

A number of attractions can be found in Dardanelle or its surrounding area, including: 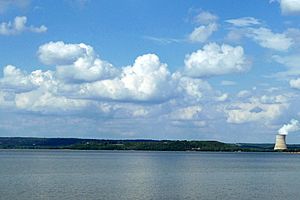 View of Lake Dardanelle, with reactor at Arkansas Nuclear One visible in background

After falling into decay for a number of years, Front Street, which borders the Arkansas River, is thriving once again. Daly's Downtown (now Front Street Grill), Savanah's Restaurant (now closed), and Millyn's Gift Store anchored this rejuvenation. A devastating fire on August 15, 2015 destroyed three historic buildings (including Millyn's) and badly damaged two others on the Southwest side of Front Street between Locust and Market streets. Three new buildings (including Millyn's) echoing the period architectural style of other commercial buildings along Front Street were constructed to replace them. Beautiful views of the river, historic buildings, shops and a variety of restaurants make Front Street one of the premier places to visit in the Arkansas River Valley. Other main commercial areas in the city include Union, Quay, and 2nd Streets.

Dardanelle is home to the Dardanelle Post-Dispatch. Established in 1853, the newspaper claims to be the oldest weekly newspaper in Arkansas.

The Arkansas River Valley Regional Library system is based in Dardanelle, which consists of one central library, located at 501 North Front Street, and six branch libraries in other communities, which provide area residents with access to print books, publications and multimedia content.

Public elementary and secondary education is provided by Dardanelle School District that leads students to graduate at Dardanelle High School.

The Dardanelle and Russellville Railroad, or "D&R" as it is known locally, is one of few remaining short-line railroads in the state. It connects Dardanelle with its larger neighbor on the north bank of the river. Highways 7, 22, 27, and 28 can be found ending or going through Dardanelle. Dardanelle is halfway between the Buffalo River to the north and Hot Springs to the south on Scenic Byway 7.

All content from Kiddle encyclopedia articles (including the article images and facts) can be freely used under Attribution-ShareAlike license, unless stated otherwise. Cite this article:
Dardanelle, Arkansas Facts for Kids. Kiddle Encyclopedia.