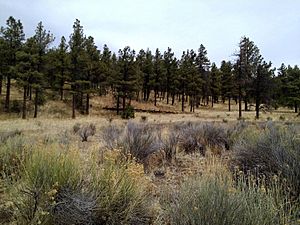 The Datil Inventoried Roadless Area within the Datil Mountains.

The Datil Mountains are a small range on the northern edge of the Mogollon-Datil volcanic field, just northwest of the Plains of San Agustin in the U.S. state of New Mexico. The range lies in Socorro and Catron Counties, north of the town of Datil, New Mexico and takes its name from the Spanish word for “date,” dating back over two hundred years. In The Place Names of New Mexico, Robert Julyan suggests two possible explanations for the name: 1) that “the seedpods of the broad-leafed yucca sufficiently resembled dates” or 2) “the Spanish applied the name to the fruit of the prickly pear cactus.” The area includes the major ridgeline of Madre Mountain (elev. 9,556 feet), which is sacred ground to the Acoma, Laguna, and Zuni tribes, as well as several other unnamed peaks and ridges.

The majority of the Datil Mountains are part of the Magdalena Ranger District of the Cibola National Forest. There are two Inventoried Roadless Areas (IRAs) within the Datil Mountains: the Datil (13,974 acres) and Madre Mountain (19,855 acres) IRAs. The landscape is expansive and natural with steep-sided hills cloaked with dense conifer forest. The jagged Sawtooth Mountains can be seen to the west.

The range contains important breeding ground for mountain lion and the southern portion is important for mountain lion connectivity. The Nature Conservancy identified the Datils as a key conservation area in New Mexico due to the range's ecological diversity and species richness.

Wildlife in the Datil Mountains

All content from Kiddle encyclopedia articles (including the article images and facts) can be freely used under Attribution-ShareAlike license, unless stated otherwise. Cite this article:
Datil Mountains Facts for Kids. Kiddle Encyclopedia.