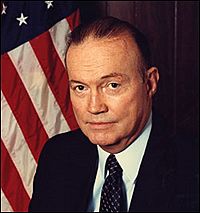 David Manker Abshire (April 11, 1926 – October 31, 2014) was an American politician. He served as a Special Counselor to President Ronald Reagan and was the U.S. Ambassador to NATO from 1983-87. Abshire was born in Chattanooga, Tennessee.

In July 2002, he was elected President of the Richard Lounsbery Foundation of New York. He was a member of the exclusive Alfalfa Club.

Abshire was a Republican and the author of seven books, the most recent being A Call to Greatness: Challenging Our Next President, which was published in 2008. Abshire was married and had five children.

He was a member of the advisory council of the Victims of Communism Memorial Foundation and sat on the advisory board of America Abroad Media.

All content from Kiddle encyclopedia articles (including the article images and facts) can be freely used under Attribution-ShareAlike license, unless stated otherwise. Cite this article:
David Manker Abshire Facts for Kids. Kiddle Encyclopedia.