DeValls Bluff is a city in and the county seat of the southern district of Prairie County, Arkansas, United States. The population was 619 at the 2010 census.

Prairie County has always been important to Arkansas for the transportation of people and goods throughout the state. Initially, it was the White River that gave the agricultural county its importance for transport, since waterways were the primary means of transportation in the period before the Louisiana Purchase. Prairie County was cut from Arkansas, Pulaski, Monroe, St. Francis, and White counties in 1846 and included present-day Lonoke County. European settlement in Prairie County came in the late 19th century, with Jacob M. DeVall and his son, Chappel, becoming the first recorded settlers around DeValls Bluff according to 1851 tax records.

During the Civil War, the city held strategic importance along the White River, which continued to be the primary shipping corridor when the Arkansas River was non-navigable. A railroad connection between North Little Rock and DeValls Bluff gave the city further strategic importance. Union forces traveling up the White from Arkansas Post under the command of Brigadier General Willis Gorman captured DeValls Bluff on January 18, 1863. However, the Union forces would eventually return to Arkansas Post, and the city returned to Confederate control. Following the capture of Little Rock, Union cavalry led by Brigadier General John Wynn Davidson joined with gunboats under the command of Lieutenant George Bache in Clarendon on August 9, 1863 and traveled up the White River to capture DeValls Bluff. Major General Frederick Steele proceeded to DeValls Bluff from Helena, and the city was used to house supplies and injured Union soldiers for the remainder of the war. 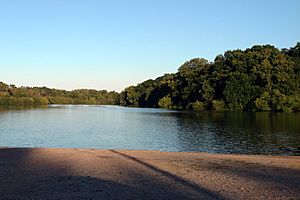 An oxbow lake of the White River in DeValls Bluff

There were 334 households out of which 33.2% had children under the age of 18 living with them, 43.7% were married couples living together, 17.4% had a female householder with no husband present, and 34.7% were non-families. 31.7% of all households were made up of individuals and 17.1% had someone living alone who was 65 years of age or older. The average household size was 2.34 and the average family size was 2.96.

All content from Kiddle encyclopedia articles (including the article images and facts) can be freely used under Attribution-ShareAlike license, unless stated otherwise. Cite this article:
DeValls Bluff, Arkansas Facts for Kids. Kiddle Encyclopedia.