Kids Encyclopedia Facts
Not to be confused with Deer Lodge, Montana, a city in Powell County.

Deer Lodge County is a county in the U.S. state of Montana. As of the 2020 United States Census, the population was 9,421. It forms a consolidated city-county government with its county seat of Anaconda. The county was established in 1865. 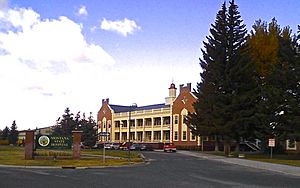 The county has a wealth of natural amenities, such as the Anaconda Mountain Range, Georgetown Lake, and the Mount Haggin wildlife management area (Montana’s largest at 54,000 acres).

Note that the town of Deer Lodge is in neighboring Powell County.

All content from Kiddle encyclopedia articles (including the article images and facts) can be freely used under Attribution-ShareAlike license, unless stated otherwise. Cite this article:
Deer Lodge County, Montana Facts for Kids. Kiddle Encyclopedia.