Diamantinsaurus is a genus of derived titanosaurian dinosaur from Early Cretaceous age rocks of Australia. 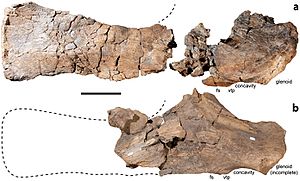 The holotype of Diamantinasaurus was first uncovered over four seasons of excavations near Winton, Queensland, Australia. The bones, found alongside the holotype of Australovenator and crocodylomorphs and molluscs. The two dinosaurs found, known from specimens catalogued as AODF 603 and 604 were described in 2009 by Scott Hocknull and his colleagues. Specimen AODF 603 became the basis for the genus Diamantinasaurus, and the species D. matildae. The species name is a reference to the song "Waltzing Matilda", written by Banjo Paterson in Winton, while the generic name is derived from the Diamantina River, running nearby the type locality combined with the Greek sauros, meaning "lizard". AODF 603, the holotype, includes the right scapula, both humeri, right ulna, both incomplete hands, dorsal ribs and gastralia, partial pelvis, and the right hindlimb missing the foot. The paratype, under the same specimen, includes dorsal and sacral vertebrae, the right sternal plate now thought to represent the remainder of a coracoid, a radius, and one manual phalanx. All these bones come from AODL 85, nicknamed the "Matilda Site" at Elderslie Sheep Station, located about 60 km (37 mi) west-northwest from Winton in central Queensland. This locality is in the upper midsection of the Winton Formation, which dates to the Cenomanian of the Late Cretaceous.

An additional specimen, AODF 836, was described in 2016. It includes portions of the skull, including a left squamosal, nearly complete braincase, right surangular, and various fragments. Additionally, the specimen also includes the atlas, axis, five other cervical vertebrae, three dorsal vertebrae, additional dorsal ribs, portions of the hip, and another right scapula.

Diamantinasaurus was a relatively small for a titanosaurian, possibly reaching 15–16 m (49–52 ft) in length and 15–20 t (17–22 short tons) in weight. Some of its relatives are known possessed armour osteoderms although is it unknown whether Diamantinasaurus had these. Like other sauropods, Diamantinasaurus would have been a large quadrupedal herbivore. Since the original description, the only major revisions include the misidentification of the "sternal plate", misplacement of manual phalanges III-1 and IV-1 as III-1 and V-1 respectively, and the identification of the missing portion of the fibula.

In 2011, the smallest positively identified titanosaur embryo was described. Although it was uncovered in Mongolia, the embryo shares the most features with Diamantinasaurus and Rapetosaurus. The embryo, from a relatively spherical 87.07–91.1 millimetres (3.428–3.587 in) egg, was identified as persisting to a lithostrotian. The embryo was slightly robust, intermediate between the robustness of Rapetosaurus and Diamantinasaurus. The egg is part of an entire nesting site for lithostrotian titanosaurs. Dating of the region also suggests that this egg predates those of Auca Mahuevo, and the eggs were laid in the Early Cretaceous.

All content from Kiddle encyclopedia articles (including the article images and facts) can be freely used under Attribution-ShareAlike license, unless stated otherwise. Cite this article:
Diamantinasaurus Facts for Kids. Kiddle Encyclopedia.