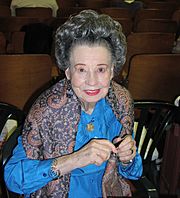 Baby Peggy was one of the three major American child stars of the Hollywood silent film era along with Jackie Coogan and Baby Marie. Between 1921 and 1923, she made over 150 short films for the Century Film Corporation. In 1922, she received over 1.2 million fan letters and by 1924, she had been dubbed The Million Dollar Baby for her $1.5 million annual salary ($22 million in 2018). Despite her childhood fame and wealth, she found herself poor and working as an extra by the 1930s.

Having an interest in both writing and history since her youth, Montgomery found a second career as an author and silent film historian in her later years under the name Diana Serra Cary. She was the author of several books including her historical novel, The Drowning of the Moon. She was also an advocate for child actors' rights.

All content from Kiddle encyclopedia articles (including the article images and facts) can be freely used under Attribution-ShareAlike license, unless stated otherwise. Cite this article:
Diana Serra Cary Facts for Kids. Kiddle Encyclopedia.