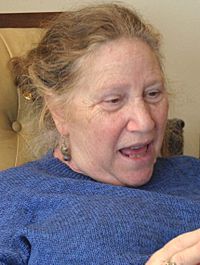 Diane di Prima (August 6, 1934 – October 25, 2020) was an American poet and playwright. She was a social justice activist and criticized people who bullied others because of their weight. Di Prima has authored nearly four dozen books, with her work translated into more than 20 languages. She was born in New York City. She was the co-founder of the New York Poets Theatre.

All content from Kiddle encyclopedia articles (including the article images and facts) can be freely used under Attribution-ShareAlike license, unless stated otherwise. Cite this article:
Diane di Prima Facts for Kids. Kiddle Encyclopedia.