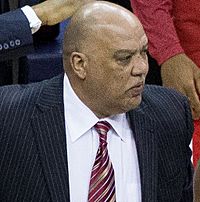 Donald David Newman (November 22, 1957 – September 11, 2018) was an American basketball coach and player and Canadian football wide receiver and an assistant coach for the Washington Wizards and San Antonio Spurs of the National Basketball Association (NBA).

Newman played Canadian football for the Saskatchewan Roughriders from 1981 to 1983. He was born in New Orleans, Louisiana.

Newman died after a long battle with cancer on September 11, 2018 in New Orleans at the age of 60.

All content from Kiddle encyclopedia articles (including the article images and facts) can be freely used under Attribution-ShareAlike license, unless stated otherwise. Cite this article:
Don Newman (basketball) Facts for Kids. Kiddle Encyclopedia.