Kids Encyclopedia Facts
Not to be confused with Double Island, Queensland. 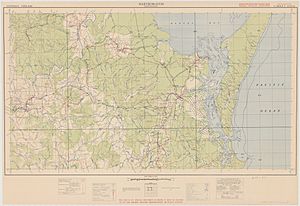 Double Island Point is a coastal headland in Queensland, Australia. It is the next headland north of Noosa and is within the Cooloola section of the Great Sandy National Park, at the southern end of Wide Bay.

The point was named by Captain Cook when he passed it on 18 May 1770, "on account of its figure" (i.e. shape). In the original of his journal he had written Fiddle Head, but crossed that out.

Despite the name, there is no (double) islands, but rather a sandspit. It is the southern point of Wide Bay.

There is no road access to the point, but four-wheel drive vehicles can go along the beach, either from the township of Rainbow Beach in Wide Bay, or the longer way up from Noosa Heads (after taking a ferry across the Noosa River).

The northern side of the point is a surfing location. On a good swell, a right-hander breaks over sand, and for perhaps as much as 300 metres in ideal conditions.

On the 16 December 2006, the Bureau of Meteorology operated weather station located at the Double Island Point Lighthouse recorded a 196 kilometer per hour wind gust (121 mph) with a severe supercell thunderstorm. This was the highest non-tornadic wind gust ever recorded from a thunderstorm in Australia and was equivalent to winds in a category 3 tropical cyclone.

Double Island Point has a number of heritage-listed sites, including:

In 1884 a lighthouse was built on the point. It is a timber with metal cladding construction, like many lighthouses in Queensland, made that way because it is cheaper than masonry, but also better suited for soft sandy soils. It was planned for only halfway up the point, but then it was realized the light wouldn't be visible to the north and so the tower was built on top of the point. The lantern was initially burning oil, then in 1923 vaporized kerosene was introduced. Later it was converted to electric power. In 1992 it was converted to solar power and demanned. The light characteristic is a single flash every 7.5 seconds, the focal plane is located 96 metres above sea level.

All content from Kiddle encyclopedia articles (including the article images and facts) can be freely used under Attribution-ShareAlike license, unless stated otherwise. Cite this article:
Double Island Point Facts for Kids. Kiddle Encyclopedia.