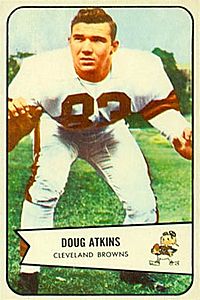 Douglas Leon Atkins (May 8, 1930 – December 30, 2015) was a former American football defensive end. He played for the Cleveland Browns, Chicago Bears and New Orleans Saints in the National Football League. He played college football at the University of Tennessee under legendary head coach Robert Neyland. He is a member of the College Football Hall of Fame and the Pro Football Hall of Fame. He was born in Humboldt, Tennessee.

All content from Kiddle encyclopedia articles (including the article images and facts) can be freely used under Attribution-ShareAlike license, unless stated otherwise. Cite this article:
Doug Atkins Facts for Kids. Kiddle Encyclopedia.