Dougal Dixon (born 9 May 1947) is a Scottish palaeontologist, geologist, educator and author. As a science writer, Dixon has written more than 210 books, most of them about dinosaurs. These dinosaur books, many of them for children, have been credited with attracting many to the study of the prehistoric animals and have won Dixon several awards.

He is perhaps most famous for his fictional "zoologies of the future", books in which Dixon explores imagined future and alternate worlds with fully realized imaginary ecosystems. These books, After Man (1981), The New Dinosaurs (1988), Man After Man (1990) and Greenworld (2010), all use their fictional settings to explain actual natural processes, with a heavy focus on evolution and natural selection. Through these books, Dixon is generally considered to be the founder of the modern speculative evolution genre. 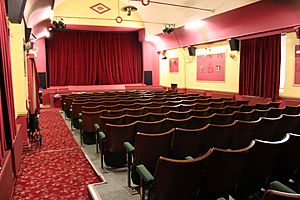 Dixon was a director and projectionist of the Rex Cinema in Wareham, Dorset

Dixon was born in Dumfries on 9 May 1947 to parents Thomas Bell and Margaret Dixon. He spent most of his younger years in the Scottish borderlands. Dixon credits the beginning of his writing career as being spawned from his love of creating stories, usually in the form of comic strips, as a child. In 1970, Dixon graduated from the University of St. Andrews with honors, having studied geology and palaeontology. Dixon's first experiences with publishing came when he worked as the geological consultant for Mitchell/Beazley Ltd. in London from 1973 to 1978. From 1978 to 1980 he worked as a book editor for Blandford Press in Dorset, England and from 1980 onwards he has worked as a freelance editor and writer. He has partaken in several geological expeditions in Iceland and England and has also been present at paleontological expeditions in the United States.

In addition to his writing career, Dixon has also been director and projectionist of a movie theatre, the Rex Cinema in Wareham, Dorset, and he has created claymation advertisements that screen before the films. From 1986 to 1990, he worked as a civilian instructor for the Air Training Corps, a British volunteer-military youth organisation. Dixon was also a chairman and a member of the board of governors at Sandford Middle School and Sandford First School, respectively, in the 1980s. Dixon is a science fiction enthusiast and has attended several conventions, often as a speaker.

On 3 April 1971 he married his wife, Jean Mary Young. Together they have two children; Gavin and Lindsay.

Dixon has had a successful career writing non-fiction books on paleontology, geology, geography and other subjects, several of which have won awards. Most of his over 200 books (fiction and non-fiction) are short children books, and the majority focus on Dixon's favorite subject, dinosaurs. Through writing books on the subject on several different levels, reviewers have credited him with attracting many to the study of dinosaurs. As a result of his knowledge on the subject, Dixon has worked as a consultant on several dinosaur programmes.

Though not as many in number, Dixon's works on other subjects, such as biology and geology, have also been praised by critics.

Dixon is by far best known for his illustrated works of speculative fiction, which largely concern "zoologies of the future", featuring his own visions of how human beings and animals might evolve in millions of years' time.

For more details, see After Man, The New Dinosaurs, and Man After Man

As a child, Dixon was inspired by H. G. Wells' The Time Machine, particularly the far future creatures featured in the book, to create his own imaginary future animals descended from creatures of the modern day. In the 1960s, Dixon was influenced by the contemporary conservationist movements, especially a campaign to save the tigers. Dixon began to ponder that should the tiger and other endangered animals go extinct, something would inevitably take their place. After seeing a "Save the Whale" badge on a friend in the late 1970s, the idea materialized again. The result was After Man: A Zoology of the Future, published in 1981, which explored an imagined Earth 50 million years in the future, featuring complete ecosystems populated by future descendants of modern day animals. The book used these imagined animals to explain various natural processes, most prominently evolution and natural selection.

Reviews for After Man were highly positive, which allowed Dixon to go on publicity tours throughout Britain and the United States. The success of the book inspired Dixon to work on further books that used fictional examples to explain real natural processes. His second such work, The New Dinosaurs: An Alternative Evolution (1988), explained the concept of zoogeography using a fictional world in which the Cretaceous-Paleogene extinction event never happened and his third, Man After Man: An Anthropology of the Future (1990), explained climate change through the eyes of future human descendants that had been genetically engineered to cope with it. Dixon also made smaller-scale projects during the writing and development of the three books, such as contributing to an 1982 article in the magazine Omni, titled Visions of Man Evolved, which featured Dixon's concepts of a future human descendant.

Through these three books, Dixon is generally considered to be the founder of the modern speculative evolution movement. The fact that Dixon created entire fictional worlds, which were then made easily accessible through books with color illustrations printed by mainstream publishing companies had a large impact and his ideas have increasingly been repurposed or used as inspirations for numerous similar projects on the internet.

The books spawned several adaptations; After Man was adapted as both a stop-motion documentary and an animated film in Japan, as well as an exhibition with "life"-size models of the animals in the book which toured England, Japan and the United States from 1983 to 1987. The New Dinosaurs was adapted into a Japanese manga series in 2008.

Since the publication of Man After Man in 1990, Dixon has been involved in numerous other projects relating to speculative evolution. In 1998, Dixon was one of the scientists featured on the Discovery Channel/BBC programme Natural History of an Alien, where several hypothesized alien ecosystems were explored. Dixon's imagined world, "Greenworld", was later utilized in another book project. His fourth personal speculative evolution book project, Greenworld, featured a complete alien world which is later pillaged and polluted by humanity. So far, Greenworld has only been published in Japan, where it was published in two volumes in 2010.

Dixon has also designed another alien world, called "Microplatia", which was originally designed for a scrapped project on exobiology at the Science Museum of London. Microplatia was a planet with small tectonic plates and no magnetic field, which produced unique forms of life.

In 2002, Dixon was brought in as a consultant for the series The Future is Wild, which explored various imagined future time periods on Earth and what animals might evolve, directly inspired by After Man. Dixon also co-authored the companion book of the series together with its producer, John Adams.

All content from Kiddle encyclopedia articles (including the article images and facts) can be freely used under Attribution-ShareAlike license, unless stated otherwise. Cite this article:
Dougal Dixon Facts for Kids. Kiddle Encyclopedia.