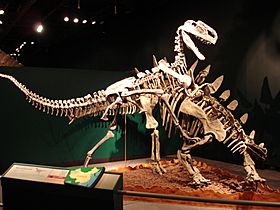 A fossil melée involving a stegosaurian (Tuojiangosaurus) and a mid-sized theropod (Monolophosaurus), Field Museum in Chicago

The Stegosaurs were a group of dinosaurs in the suborder Thyreophora. They have small heads, peg-like teeth and vertical bony plates and spines on their back and tail. They flourished from the Upper Jurassic to the Lower Cretaceous.

The Stegosauria was originally named as an order by O.C. Marsh in 1877. Now it is treated as an infraorder or suborder (or simply a clade) within Thyreophora, the armoured dinosaurs. It includes the families Huayangosauridae and Stegosauridae.

The Huayangosauridae were an early family of stegosaurs which lived during the Middle Jurassic. They were smaller than later stegosaurs and had shorter and higher skulls. Currently, the only confirmed genus included is the type genus Huayangosaurus of China. The poorly-known remains of Regnosaurus from England, however, indicate it too could be a member. Its lower jaw is very similar to the former.

The vast majority of stegosaurs being to the Stegosauridae, found in the later part of the Jurassic and the early Cretaceous. It includes the well-known Stegosaurus. The family is widespread, with members across the Northern Hemisphere and Africa.

All content from Kiddle encyclopedia articles (including the article images and facts) can be freely used under Attribution-ShareAlike license, unless stated otherwise. Cite this article:
Stegosauria Facts for Kids. Kiddle Encyclopedia.