Dowdeswell Reservoir and Wood from the south, residuum and Scobb's Grove off photo to right, and Cotswold Way National Trail to left of wood and below dam embankment

Dowdeswell Reservoir and former water treatment works lie below the parish of Dowdeswell in Gloucestershire. They were originally built by Cheltenham Corporation to supply the town of Cheltenham with drinking water (since 1886) and subsequently became part of the Severn Trent network.

It is currently owned and managed by the Environment Agency and is managed as a 'balancing pond' for the water catchment from the east end of the valley.

Severn Trent closed the water treatment works with the commissioning of the Mythe Treatment Works on the river Severn, and the reservoir itself became a flood storage reservoir for the River Chelt in an attempt to protect the town of Cheltenham from flooding from the east. The town nonetheless suffered flooding in the July 2007 floods though this was not only from the river Chelt at Dowdeswell, but from all the streams which join the Chelt within the town and its outskirts. The Dowdeswell 'balancing pond' only deals with the Chelt (really a stream at this point in its life), Dowdeswell stream and runoff from the limestone scarp.

The Cotswold Way National Trail runs alongside the dam end of the reservoir (below the dam embankment) and alongside the western edge of Dowdeswell Woods.

The reservoir and wood are listed in the ‘Cotswold District’ Local Plan 2001-2011 (on line) as Key Wildlife Sites.

They are near Arle Grove nature reserve. 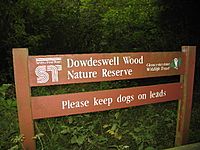 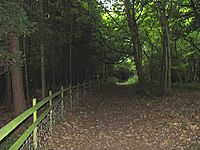 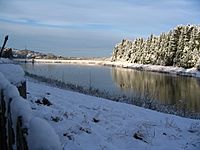 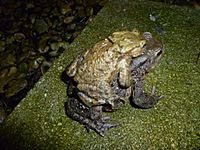 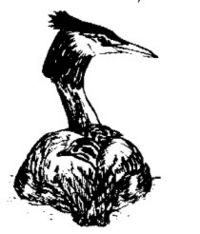 Great Crested Grebe with young on back

The Reservoir, Residuum and Scobb’s Grove

The main body of water supports many resident and wintering wildfowl: Moorhen, Coot, Mallard and Little Grebe and Great Crested Grebes regularly breed. The surrounding habits provide nesting sites. There is a significant aquatic and grassland flora including grassland supporting Common Spotted Orchid, Pyramidal Orchid and Cowslip. The reservoir is a major spawning ground for the Common Toad and there are signs which are opened each year at migration time on the A40 which runs alongside the reservoir. There were originally two toads tunnels from the south side of the A40 into the reservoir grassland, but these have since been removed as a result of roadworks.

The reservoir supports the native crayfish (Austropotamobius pallipes) which is protected on Schedule 5 of the Wildlife & Countryside Act 1981. During the engineering works undertaken in 1998 Severn Trent put in place a management programme for the protection of this white-clawed crayfish.

Scobb’s Grove is a separate copse of damp Ash, Alder, Hazel and Willow woodland containing ferns, Small Teasel and Alternate-leaved Golden-saxifrage. It has an interesting bird life including Owls.

There is currently no lease agreement for these areas with the Gloucestershire Wildlife Trust.

Dowdeswell wood is a 82-hectare (200-acre) site and lies on the northern slopes of the Chelt valley and one mile east of Charlton Kings. The wood forms part of the gathering grounds for Dowdeswell Reservoir and became an extension to this reserve in 1992 under agreement with Severn Trent.

Extensive management work was carried out and a way-marked series of paths were created accessible from the Cotswold Way national trail.

The character of this wood was changed dramatically in the 1950s and subsequently by replacing with conifers following felling of mature Oak, Ash, Beech and many diseased Elms. Replanting work has replaced conifers for broad-leaf.

A good ground flora is present mostly in the broad-leaved areas. Bluebell, Yellow Archangel, Wood Anemone, Moschatel, Early-purple Orchid and Ramsons (wood garlic). There are Roman Snails in a site of a Roman Settlement in the north of the wood. The Common Dormouse is present as are Roe and Muntjac deer.

There is currently no lease agreement for these areas with the Gloucestershire Wildlife Trust.

All content from Kiddle encyclopedia articles (including the article images and facts) can be freely used under Attribution-ShareAlike license, unless stated otherwise. Cite this article:
Dowdeswell Reservoir Facts for Kids. Kiddle Encyclopedia.