Drain is a city in Douglas County, Oregon, United States. The population was 1,151 at the 2010 census. Drain is named after town founder and politician Charles J. Drain, who donated 60 acres (24 ha) of nearby land to the Oregon and California Railroad in 1871.

In 1876, a coach road was established between Drain and Scottsburg. Drain was the starting point for the Drain-Coos Bay stage line, which ran to Scottsburg and then by river steamer to Gardiner and the beach on the south side of the mouth of the Umpqua River.

The Drain Normal School was founded in the community in 1883 by the Methodist Church. The state took over the school in 1885 and named it as the Central Oregon State Normal School, before it closed in June 1908. 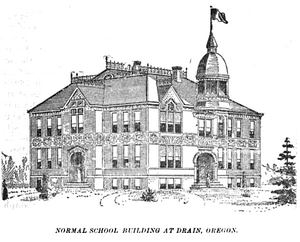 According to the United States Census Bureau, the city has a total area of 0.61 square miles (1.58 km2), all of it land.

Drain is at the crossroads of Oregon Route 99 and Oregon Route 38, at a pass in the Coast Range, on the way west to the Pacific Ocean.

Elk Creek and Pass Creek, both tributaries of the Umpqua River, converge in Drain.

Pass Creek Bridge, a covered bridge in a park behind the Drain Civic Center, was formerly a road bridge. In 1987, the City moved the structure to the park and opened it to pedestrian traffic only. In 2014, the City completely closed the bridge, made unsafe by rotting support timbers.

There were 454 households, of which 33.7% had children under the age of 18 living with them, 50.0% were married couples living together, 13.7% had a female householder with no husband present, 6.6% had a male householder with no wife present, and 29.7% were non-families. 22.9% of all households were made up of individuals, and 9.5% had someone living alone who was 65 years of age or older. The average household size was 2.54 and the average family size was 2.95.

All content from Kiddle encyclopedia articles (including the article images and facts) can be freely used under Attribution-ShareAlike license, unless stated otherwise. Cite this article:
Drain, Oregon Facts for Kids. Kiddle Encyclopedia.