Draketown is an unincorporated community in Haralson County, Georgia, United States. It was first settled by a "Moorish aboriginal civilization" known as the Mound Builders, a group large in stature and descendants of a mighty civilization. Around the 15th or 16th century, the Cherokee Indians and Creek Indians replaced the Mound Builders and began their own society. Mostly the Cherokee Indians settled In the Draketown area.

Draketown's elevation is 1,243 feet (379 m). It is located close to the Carroll and Paulding County lines. Haralson County is in the Eastern time zone (GMT -5).

Draketown was founded by the Cherokee Indians, who called it "Long Leaf". The name Long Leaf came from a long-leaf pine that grew in front of the post office. It was next settled by white men from the Ducktown Copper Mine who had found copper nearby. The men from Ducktown named the area Draketown because a drake is a male duck. In 1896, the population was reported to be 100. In 1907, the population was recorded as 300.

The Tallapoosa (Waldrop) copper mine was settled by pioneers before Haralson County was established. It was located approximately 100 yards north of Coppermine Road, 600 yards east of the Tallapoosa River. The land of the mine, and three additional land plots, was bought by Thomas Greer Waldrop for $600.

"Copper excitement" started when Elijah Brooks was plowing on the western area of Draketown, which was at that time known as "Long Leaf Post Office". As he was plowing, he turned up some bright yellow granular material that burned when set on fire. Believing that his sample might be copper, Brooks took it for further inspection in Villa Rica; a sample was sent to Tennessee. Immediately a large influx of prospectors and promoters from Tennessee came to Haralson County. Work began on the copper mine before the civil war. By 1874, a 48-foot vertical shaft was sunk by the Tennessee group.

The Tallapoosa Mining Company built a 235-foot incline to the bottom of the 48-foot shaft previously installed. The vein was approximately 150 feet and furnaces were built to extract the copper from the ground. 15,000 tons of ore were mined from the ground, but only 7,000 tons of ore was ever shipped. Most went to the Georgia Chemical Company of Atlanta, who paid $4 a ton. The ore was hauled from Draketown to Rockmart, 16 miles away, then shipped by the railroad to Atlanta. Copper operations stopped around 1885 but the land was prospected and explored continued around 1900 to 1905. In 1916, the Georgia Pyrite Company bought the Waldrop mine and some adjoining lots. The total area was around 397 acres.

From 1916 to 1917, the Arizona and Georgia Development Company leased the property. It was interested in the large amount of material that was milled and stored from 1881–1885. The material contained about 50 percent copper and around 50,000 pounds was collected and sold. Due to difficulties shipping the ore, the Tallapoosa (Waldrop) mine eventually came to a close.

One of the first stories of the Draketown area involves a resident named Walter S. Butler. Butler had traded with the Cherokee people for years, and he eventually fell in love with and married a Cherokee woman. During the 1830s, the Cherokees were rounded up and forced to leave the area. They blindfolded Butler and took him on a long walk through the woods, crossing water several times. When the blindfold was removed, Butler was led through some underbrush to a cave. Inside the cave was a gold mine, with walls of shining yellow metal. Butler filled his pockets with gold nuggets from the floor of the mine. Unfortunately for Butler and his descendants, he was blindfolded again before leaving the mine. Many treasure hunters have looked for this cave, but none have been able to locate it.

The first physician of Draketown was Robert Berry Hutcheson. 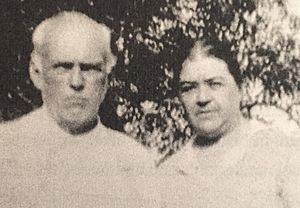 Benjamin Franklin Eaves was the son of Cleburn Camp Eaves and Mary Amanda Kirk, both first pioneers of Haralson County. He attended Emory University and focused his entire practice in the Draketown Community serving Paulding, Carroll, Polk, and Haralson County residents. During the beginning of his career, Eaves was known as the "horse and buggy" doctor. In 1914, he purchased his first car. 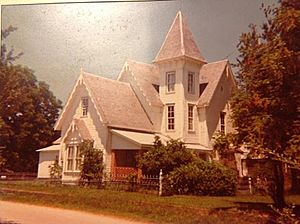 William Franklin Golden, son of Seaborn Golden and Sara Whitton, was a medical doctor and surgeon who practiced in Haralson, Polk, Paulding, and Carroll counties for forty years. He studied at Tallapoosa High School, and graduated Atlanta Medical College in 1877. In 1888, he took graduate classes in surgery at the London School of Medicine

Golden served several terms in both the Georgia House of Representatives and the State Senate. His wife was Sarah Susanne Hutcheston, daughter of Dr. Robert Berry Hutcheson.

Golden was a contractor in the building of the Haralson County Courthouse, now the Buchanan Library in Buchanan, Georgia. He was also president of the Temple Banking Company. 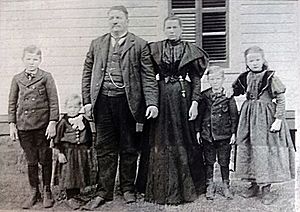 On April 2, 1908, he became a member of Draketown Baptist Church. In December of the same year, he married Pearl McBrayer, of Draketown.

In 1920, Hogue left Draketown and started a practice in Villa Rica.

Drawn by the school and the doctors in Draketown, many people moved to the area. There was a cotton gin and a gristmill run by Calvin Cissero "Cal" Bishop, a blacksmith shoprun by William Morris (later by William Taylor "Dub" Eaves), and a hotel built by Will Abercombie. Draketown also had a couple of stores, including Reeves General Mercantile (owned by John Reeves) and Strickland and Rose. Oss Carroll ran a dry-goods store on a corner across the street from Dr. W.F. Goldin's house (torn down November 17, 2015).

In 1905, the first steam-powered vehicle arrived in Draketown, accompanied by a mule. The first internal-combustion automobile arrived in 1910. It was a Model T Ford owned by Dr. W.F. Golden. A year later, four Maxwell cars, one owned by Dr. B.F. Eaves, arrived. Most of the citizens could not afford automobiles, and traveled by horse and buggy or wagon instead. It took an entire day to travel one-way to or from the county seat, Buchanan.

The hotel, built by Will Abercrombie, served as housing for the teachers of the Draketown Baptist Institute. Oss Carroll later moved his store into the hotel. Across the main Draketown road was a parsonage house, a sizable two-story building. The road from Temple went through what is now Edwards Road (a small, one-lane dirt road) and continued through what is now Eaves Drive. The stretch of road that connects Highway 113 to Highway 120 was not cut until much later.

All content from Kiddle encyclopedia articles (including the article images and facts) can be freely used under Attribution-ShareAlike license, unless stated otherwise. Cite this article:
Draketown, Georgia Facts for Kids. Kiddle Encyclopedia.