On 9 July 2012 at Dreamworld, the Australian Minister for Tourism Martin Ferguson announced that the Australian Government would contribute $1.1 million to the redevelopment of the Australian Wildlife Experience into an Indigenous tourist experience. Dreamworld's owners, Ardent Leisure, vowed to match the grant in order to have the $2.2 million redeveloped area open by late 2013. Dreamworld has previously worked with the Indigenous community to develop the Dreamworld Dreamtime show in 2010 and 2011. Dreamworld Corroboree officially opened to the public on 12 December 2013. 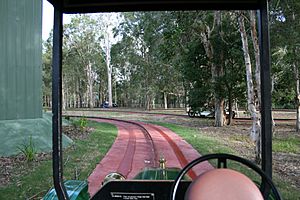 Avis Vintage Cars is a fixed track car ride with scaled-down Ford Model T cars fixed onto a concrete track with a single guide rail. The ride was relocated from its original location due to the placement of Mick Doohan's Motocoaster ride in 2007. The ride opened in 1981 with the park in the Rivertown area of the park. The fourteen replicas cars each seat four people and were purchased for A$12,000 each.

Located in the Dreamworld Woolshed, the Australian Sheep Shearing Show is an interactive show held several times a day set against an outback station and providing visitors with a taste of life on an Australian farm. It showcases the abilities of farm dogs and shearing of a sheep. Guests get to try some damper and billy tea at the conclusion of the show.

Dreamworld Corroboree also features presentations based on the Aboriginal culture, including demonstrations of traditional music, making fire, and cultural weapons.

The Australian Animal Presentation was a show which displayed a selection of animals from the critically endangered bilby to crocodiles, snakes, cockatoos and koalas. Guests had the opportunity to get up close and take photographs with the wildlife. The show ran from 2009 to 2013. 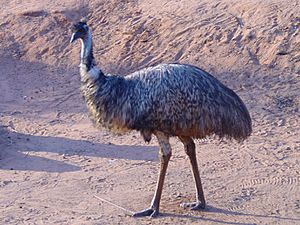 An emu at the Outback Adventure section of Dreamworld Corroboree.

The Bilby House is an exhibit where guests can get up close with the critically endangered bilby marsupial animal. The exhibit is specifically designed for bilbies as it is a semi-nocturnal house.

Daintree Rainforest is an exhibit of animals which live in tropical climates. Animals include cassowaries, red-legged pademelons, tree frogs, green tree pythons and a scrub python.

Dreamworld Corroboree has the first blue-eyed koala known to be born in captivity in the world.

Koala Country is an exhibit focusing on Dreamworld's collection of 58 koalas, including the first blue-eyed koala known to be born in captivity. The "Cuddle a Koala" feature allows guests to have a photo professionally taken holding one of the park's koalas. This section also features kangaroos which guests can feed and pet. When opening in 1987, Koala Country was home to just 14 koalas.

All content from Kiddle encyclopedia articles (including the article images and facts) can be freely used under Attribution-ShareAlike license, unless stated otherwise. Cite this article:
Dreamworld Corroboree Facts for Kids. Kiddle Encyclopedia.