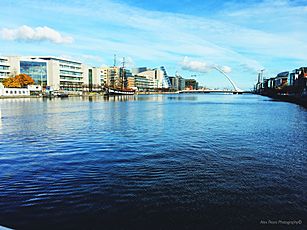 The Dublin quays (Irish: Céanna Bhaile Átha Cliath) refers to the two roadways and quays that run along the north and south banks of the River Liffey in Dublin, Ireland. The stretches of the two continuous streets have several different names, however all but three of the names (Swift's Row, Bachelors Walk and Usher's Island) share the same "Quay" designation. The quays have played an important part in Dublin's history.

Vikings were among the first settlers in Dublin, and many Viking artifacts were found at what is now Wood Quay. The quays were first developed during the time of King John in the early 13th century when the monarch licensed citizens to erect buildings on the River Liffey. They became the center of the Irish shipping trade until the 1800s when the river in this section was considered too shallow for the more modern heavy ships. 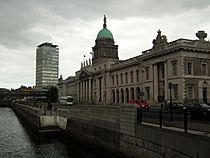 The Custom House, one of Dublin's major landmarks on Custom House Quay, was completed in 1791. The quay takes its namesake from the building. Later, the Four Courts on Inns Quay was completed in 1802 and is currently home to the Supreme Court of Ireland and the High Court. Both were designed by noted architect James Gandon.

Burgh Quay is named after Elizabeth Burgh, wife of Anthony Foster whose son was Rt. Hon. John Foster, last speaker of the Irish House of Commons. Burgh Quay was once the site of the Tivoli Theatre. The Corn Exchange Building, designed by George Halpin in 1815, was approved by the Wide Streets Commission in 1816 and work commenced on this building soon afterward. Its granite facade still remains on Burgh Quay. Shipping came as far upstream as Burgh Quay until 1879 when Butt Bridge was constructed. A number of the buildings on Burgh Quay (including number 8) still retain remnants of the shopfronts designed for the Wide Streets commissioners.

The 20th century saw much development to the quays. One controversial development was at Wood Quay by the Dublin Corporation in the late 1970s, when there were many archeological Viking finds. This led to a very public and unsuccessful campaign to halt the development.

A number of artists have found inspiration from the quays. In 1898, author Frances A. Gerard described the Dublin quays as follows: "Much of the picturesque appearance of Dublin is due to the Quays which intersect the City and the Bridges which span the Liffey; they impart to it a foreign air resembling the Quays of Paris." Irish novelist James Joyce had many of his story lines take place at the Dublin quays, including Eveline (1904) and An Encounter (1914). Joyce biographer Michael H. Begnal wrote, "Joyce associated the Liffey Quays with the desire for escape."

The 1987 film The Dead, adapted from Joyce's story, was filmed by John Huston at Usher's Island. In Joyce's story The Dead, the sisters Kate and Julia Morkan host their annual dance at their "dark gaunt house on Usher's Island." 'Ushers Island' was the name of a competitor in the 1994 Grand National at Aintree, falling at the third fence. In 2015, folk musician Andy Irvine launched a band called 'Usher's Island' (a reference to the Dublin quay), with members Dónal Lunny, Paddy Glackin, Michael McGoldrick, and John Doyle.

Bachelors Walk was a comedy-drama aired on RTÉ during March 2001, following the lives of three bachelors who lived on the titular quay.

Notable buildings on the Dublin quays

All content from Kiddle encyclopedia articles (including the article images and facts) can be freely used under Attribution-ShareAlike license, unless stated otherwise. Cite this article:
Dublin quays Facts for Kids. Kiddle Encyclopedia.