Duncanville is a city in southern Dallas County, Texas, in the United States. Duncanville's population was 38,524 at the 2010 census. The city is part of the Best Southwest area, which includes Duncanville, Cedar Hill, DeSoto, and Lancaster.

According to the United States Census Bureau, the city has a total area of 11.3 square miles (29 km2), all of it land.

Settlement of the area began in 1845, when Illinois resident Crawford Trees purchased several thousand acres south of Camp Dallas. In 1880 the Chicago, Texas and Mexican Central Railway reached the area and built Duncan Switch, named for a line foreman. Charles P. Nance, the community's first postmaster, renamed the settlement Duncanville in 1882. By the late 19th century Duncanville was home to a dry goods stores, a pharmacy, a domino parlor, and a school. Between 1904 and 1933 the population of Duncanville increased from 113 to more than 300.

During World War II, the Army Air Corps established a landing field for flight training on property near the present-day intersection of Main and Wheatland roads.

Duncanville residents incorporated the city on August 2, 1947. During the post-war years, the military developed the Army’s old landing field into the Duncanville Air Force Station, which was the headquarters for the four Nike-Hercules missile launch sites guarding Dallas/Fort Worth from Soviet bomber attack. It also housed the Air Force tracking radars for the region. 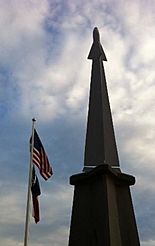 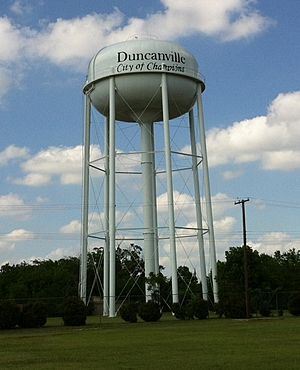 Water tower in the Fairmeadows neighborhood of Duncanville, depicting the city slogan. 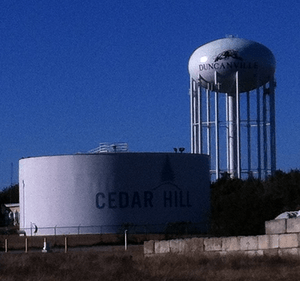 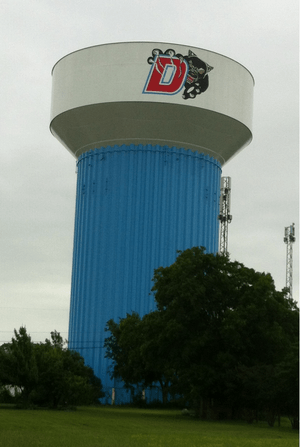 Water tower on east side of Clark Road.

The Texas Historical Commission has designated the City of Duncanville as an official Main Street City.

Duncanville recognizes the importance of the former Duncanville Air Force Station. The Duncanville Air Force Station was closed on July 1, 1964; however the Army continued to operate the Nike Missile air defense operations until 1969 at which point, the facility was turned over to the city. The WWII-era barracks and some other structures were initially re-purposed for civic and community use. Over time the buildings were systematically demolished, obliterating all signs of the historic base. But the history of the facility lives on in a monument which stands outside the library and community center.

The "stone igloo", a spring house originally located near the intersection of Center Street and Cedar Ridge Road, was preserved in a unique way. In the late 1960s or early 1970s it was demolished, thereby producing a supply of rocks that were used to build a replica of the structure at a nearby park and paving the way for the construction of a neighborhood retail center.

Various pieces of the city's history are preserved at the Duncanville Historical Park, which is located on Wheatland Road in Armstrong Park on land that was once a part of the Duncanville Air Force Station. Historic buildings include the city’s first Music Room.

There were 12,896 households out of which 38.4% had children under the age of 18 living with them, 59.3% were married couples living together, 16.1% had a female householder with no husband present, and 20.6% were non-families. 17.6% of all households were made up of individuals and 5.7% had someone living alone who was 65 years of age or older. The average household size was 2.79 and the average family size was 3.15.

All content from Kiddle encyclopedia articles (including the article images and facts) can be freely used under Attribution-ShareAlike license, unless stated otherwise. Cite this article:
Duncanville, Texas Facts for Kids. Kiddle Encyclopedia.